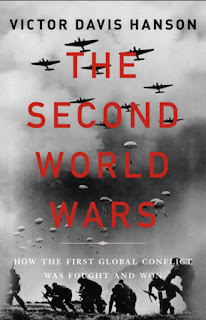 the second world wars by victor davis hanson is an excellent resource for a complete review and analysis of what we now call world war two.  having been born over 30 years after the end of world war two and having heard my own father (who is 90 years old at this writing) speak of his experiences as well has his older brother's experience, i've always been fascinated with what life must have been like living in the 1930s and 1940s.  i love world war two movies from where eagles dare to patton to saving private ryan and band of brothers (book as well as hbo mini series).  my boyhood fascination with the war has largely been focused on the bombing of pearl harbor and the american efforts on the european western front of the war.  over the years, that fascination has turned to a chilling effect as i realized and comprehended the atrocities of both war in general as well as those specific to world war two.

the reason for the change from boyhood fascination to a chilling effect started in 1993 when schindler's list was released.  i quickly realized how frightening humans can act toward other humans.  other movies that portrayed the holocaust have had a similar terrifying effect.  six million souls lost to extermination!  it is shocking.

then in 2016, i stumbled across a website dedicated to visually showing, by the numbers, the human cost of world war two.  the website is called the fallen of world war ii.  if you have not had the chance, spend some time and even donate to the site.  victor davis hanson, in chapter 19 entitled the dead, cites some stats on the number.  low end estimates are around 50 million, with high end around 80 million.  his personal opinion is around 60-65 million dead.  what is really insightful of the fallen dead website is it shows where and how those millions of people died.  the numbers are mind-boggling when you look at the western front.  but what is haunting are the numbers on the eastern front where there germans and russians fought.  hanson goes into the why of this a bit in his book, in that, when two extreme ideologies meet in war (nazism vs communism) and both styles of leadership are of the mindset of win or die, then deaths add up very quickly.

the hatred between the germans and russians explodes on the battlefield and sieges.  in his sieges chapter, hanson says, "totalitarian ideologies framed the struggle in manichean terms unlike anything seen in the rivalries of the past.  hitler planned a war of nazi extermination to either kill off or enslave the supposedly inferior race of slavic untermenschen of russia and liquidate millions of jews in his eastward path" (p. 309).  and just to provide a bit of context of scale, the number of dead russians from just the leningrad siege were four times greater than all the american dead of the entire war! (p. 313).

between the fallen of world war ii website and hanson's the second world wars, i have gained a much greater appreciation of the epic scale of world war two.  my myopic american view of the war has been greatly disabused and i have a much greater appreciation for the exceptionally dire circumstances the french, british and americans were in by accepting an alliance with a communist state (russia).

the second really important point i learned about world war two, is tied directly with hanson's premise and title of the book.  world war one, as we know it today, was called "the great war" in the 1920s, 30s and 40s.  it really wasn't until around 1942 after japan attacked the united states and germany invaded russia that it turned into a global war.  up to that point, all during the 1930s and up to september 1939, it was largely viewed as a series of border conflicts between hitler and his neighbors.  once japan bombed pearl harbor and germany betrayed their former ally (russia), the war greatly escalated and exploded globally.  existential crises popped up across the world.  only years after, did the great war change names to world war one and the first truly global conflict was dubbed world war two.  which leads to the next point i learned from the book: hitler was equipped very well to win border wars, but he and his staff truly failed to appreciate the massive resources the americans and russians had at their disposal - hitler was absolutely not prepared to fight a global war.

in essence, the allies won due to innovation and production power.  the nazis and imperial japanese were technologically advanced in the late 1930s, but their failure to adapt and establish consistent, reliable production methods (food and war equipment), failed them.  the americans, british and russians, on the other hand, collaborated, innovated, adapted and consistently produced far more than the axis powers were able to.  russian production was moved far to the other side of russia in the ural mountains - far from hitlers bombers (who also never was able to develop a long-range bomber like the lancaster, b-17 or b-29).  american continental soil was never in danger and americans were able to produce and supply not only their army, air force and navy, but also they were able to supply russia with thousands of trucks and transports.  hitler may have thought he could attack quickly and overwhelm europe and russia, but when he was not successful against britain, he blundered big time by moving east to russia, where his armies were met by hoards of russian soldiers and t-34 tanks.  of course, by 1944 and the establishment of the western front, all those resources were spent and hitler could not sustain both fronts.

japan and britain had the largest navies in the world in 1939.  the americans had a sizable navy and adequate air navel power, but no where near the japanese strength.  but when american production power ramped up and japanese production faltered, the tide shifted to the americans.  also, the types of warships the japanese and americans decided to build largely shaped the war.  shipbuilding, coupled with slight changes in strategy in aerial bombing over japan and then eventually the technological innovation of the nuclear bomb forced the japanese to surrender.

hanson also does a great job segueing from end-of-war descriptions to post-war new world order descriptions.  understanding world war two and the end results, enables the student of history to understand world history for the next 70 years.  even today, the world is still reeling from the effects of the first global conflict.  hanson also addresses the historical question of: are 65 million deaths worth a 70 year "peace"?  did we truly get peace for the price of all those dead?  or would the world have been a bloodier place (or not) had hitler not invaded russia and held the gains made up to 1941?

one other thought (they keep coming to me) - churchill entered the world stage at just the right time.  britain was the only country to fight nazi germany from the day they invaded poland to their defeat.  churchill was largely responsible for keeping up the fight when more calls of appeasement and conciliation with hitler.  after having watched darkest hour last month during christmas as well as dinkirk last may, i've grown a desire to find a good churchill biography and read it.

overall - a phenomenal book, one that captures the breadth as well as complexity and detail of the first global war.  he cites lots of statistics and arrives at sound conclusions.  for someone wanting to grasp an appreciation and good perspective of the whole war, pick up this book, read it and refer to it often.
Posted by rockyrook at 9:20 PM