I posted a video the other and day and now there seems to be an explosion of interest. I do not know whether or not the posting of the video and the increased interest are correlated or not. There are a lot of searches for shangriladiet.com and this blog seems to consistently pop up in the top 10 hits.

But anyway, here's a graphic on the stats for this blog ... lots and lots of hits between yesterday and today. Compared to last week, today was a deluge of hits. 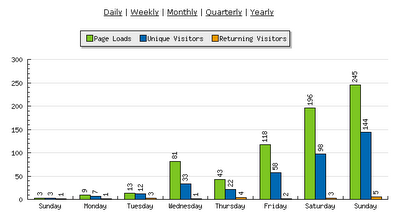 This week, I'm committed to really sticking to the diet. I'm going to go back to the SW in the morning and WO in the afternoon. Since I've not been taking any WO in over a week now, my hunger urges have been strong and long. It's time to nip this thing in the butt and lost those last 4 pounds (or maybe more now!)
Posted by rockyrook at 9:50 AM No comments:

Great video on the diet
Posted by rockyrook at 9:48 AM No comments:

The pounds seem to be coming off more slowly ... but they are coming off. 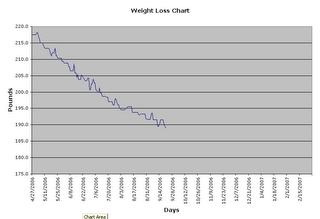 Above is my chart in my Excel tracking sheet. I figure this serves as a good visual of my progress.

Interestingly enough, though, is I haven't been ingesting any walnut oil this week. In fact, I've only played basketball on Tuesday and Thursday (today), but have not worked out on the other days. Residual effects? Who knows.

The bottom line is that I'm less than 4 pounds from reaching my goal.

I weighed in this morning ... same time of day, same scale with just the towel.

Another noteworthy item besides the fact that I've not taken any walnut oil this week, but on two days this week, I ate a bagel and two donuts. One morning someone had Einstein bagels in his office. I love those bagels. So I ate one. Yesterday morning, our company kicked off its United Way campaign. As part of the kick off, they had Krispy Kreme donuts in the lobby. I ate two.

My dirtly little secret about losing my weight (or so I thought) is the fact that I've dropped breakfast from my lineup of daily meals. Before the diet, I would eat a packet of oatmeal every morning. But now that I've eaten a light breakfast in place of the WO has me a little suprised.

Anyway ... I'm just happy that I'm in good physical condition, that I can play basketball, bike for 30 minutes, run for 30 minutes, swim 15 laps and that I'm losing weight and seem to be keeping it off.
Posted by rockyrook at 9:47 AM No comments:

Another Milestone in my Quest

If you've been following me, you may know that breaking 190 has been tough. Breaking 200 took a while too. 200 took a little over a week to break. 190 took almost two weeks. I've been hovering around 191 since August 31st.

This weekend was a meat-eating weekend for our family. My wife seasoned some pork chops and I grilled them on the barby. Then on Sunday it was steak. We also had a gallon of 1/2-the-fat ice cream sitting in the freezer ... not good for me ... that's like putting a gallon of blood next to Dracula's bed.

Yesterday morning I went to the gym. I did 20 laps in the pool (each lap is about 25 yards). Then I headed upstairs and biked for 30 minutes. I didn't just peddle mindlessly. I worked hard ... upped the stress on the bike and made it into a real workout. I weighed in as usual. I was 191.5 ... basically the same as when I had weighed just a few days prior. So I was primed to break the 190 mark this morning. I had a good day of healthy eating yesterday too. I took the WO in the morning, ate about 3 cups of fried rice with vegetables and leftover steak bits. I ate one cup of lemon yogurt. Later that afternoon, a co-worker who is a big peanut M&M fan like me, offered me some new super-sized-pastel-looking peanut M&Ms. I took a handful and enjoyed. The reason they're bigger is not because of bigger peanuts, but more chocolate. They were really good. For dinner that night, my wife made a delicious French toast casserole. It was French bread broken up in big chunks mixed in with apples, dried cranberries and eggs. Then she cooked it in the oven and served it by pouring home-made butter-sugar syrup on it ... oh WOW! It was good. Then we had some chocolate cookies for dessert.

After dinner, I went shopping. I've lost about 6 inches off my waist. None of my pants fit. In fact, I can take my old pants off without unzipping or unbuckling them. So I bought two new pairs of pants and a few shirts. I had to get new belts too because I had to keep putting new holes in the old one ... so I had about 6 inches of slack and it didn't look too good.

This morning ... I played a solid hour of basketball. I had some really good games. I was really tired though. After a cold shower, I weighed in.

4.5 lbs. to go! My projection puts my target goal at around the first week of October.

Also, today I figured out that in order to drink the recommended 1 gallon of water per day, I need to drink about 8 glasses of water ... the styrofoam cups at work hold just under 20 oz. There are 128 oz. in a gallon ... so that equals about 7 to 8 cups ... 4 in the morning, 4 in the the afternoon. Right now I'm doing about 5 a day.
Posted by rockyrook at 9:26 AM No comments:

I've arrived at a number of conclusions recently.

First, the Taylor scale I bought ... I'm not pleased with it. I've been comparing it to the gym scale and the only thing that is consistent about the Taylor is its inconsistency. The gym scale on the other hand seems to be reliable. So I'm bummed about that. But on the up side, I think I'll be going to the gym a few more days a week rather than to just play basketball. So I'll be using the gym scale more often. 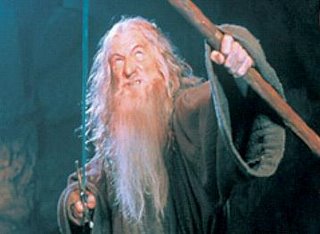 I almost feel like I need Gandalf to do the same thing to my favorite ice cream and snacks that he did to the Balrog ... "You cannot pass. The dark calories will not avail you, fat of Cows. Go back to the supermarket shelf! You cannot pass."

Tomorrow I'll be going to the gym again. I've been considering taking up swimming and biking to supplement my running for my off-basketball days. So tomorrow morning I plan on swimming a few laps and then hopping on the bike. Eventually I would want to turn those workouts into a triathlon.