I lost my chess match last night, so I was glad to wake up this morning to some good news. I stepped on the home scale and it read 188.4! This was good news because the home scale is always about 3 to 4 pounds above the gym (official) scale.

After a good workout playing basketball, I showered and weighed in.

As always, same time of day, same scale with just the towel. 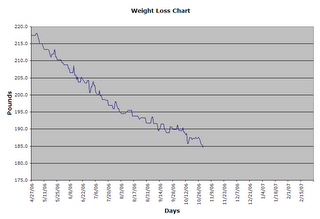 Now the interesting thing to note here is that I am just getting over a cold. I had it most of the weekend. When I get a cold, I get stuffed up and my sense of taste is gone. So when I was eating all weekend, it was like I was eating tasteless calories.

So chalk up another method for losing weight ... get a cold and lose your sense of taste. But with that said, I must admit it was extremely frustrating not to taste food. I lost my appetite. But when I finally cleared up a bit and got my taste buds back, I ate like a pig and savored every bite.

The target weight has been acquired ... phase one is accomplished. Phase two is to keep off the pounds for 6 months. I may continue to lose pounds because my ideal weight is 175. Plus, I still have some fat around the gut that I could lose. I will try to check back in every month or so to report my weight.

The important thing to note is that I will continue to ingest sugar water with walnut oil every morning. I'm not going to really change anything. In my mind, this is not a diet in the sense that one diets for a few months and then returns to the status quo. Instead, I view this as a lifestyle change. I don't think the Shangri-La Diet should be called a diet at all. But that is all symantics. But I just want all my thousands of readers to know that I plan on continue to ingest SW/WO every day. I also continue to take 3 capsules of flax seed oil every morning after waking up.

If all goes well, then April 30, 2007 (six months from today and one year from starting the diet) will be my last post on this blog.

HAPPY HALLOWEEN!
Posted by rockyrook at 11:19 AM No comments:

An unbelievable turn of events occured this weekend. I headed into the weekend at 188.7 knowing that I wouldn't play basketball Saturday morning. I wasn't too concerned. I just figured I could get to the gym later in the day and work out.

30 minutes later, I was feeling pretty good. I jumped on the bike and peddled. I was energized and feeling great. It was like the longer I worked out, the more energy I had which fueled me even more.

60 minutes later, I'm done with my whole workout. I head to the locker room and take a nice, long, cold shower. It felt great. It was around 11:30am.

I step onto the scale with just the towel 185.8 !?! I couldn't believe my eyes. So I put my clothes in my bag and then went back to the scale ... it was the same. I was shocked.

So then came the rationalizations ... I just sweat a lot ... lost lots of water ... it was the extra workout and so on and so on.

I went home determined to eat healthy this weekend ... but that lasted about 20 minutes. I pigged out. When I say pigged out, I mean compared to what I do during the week. But by no stretch of the imagination did I gorge myself all weekend. It was more like constant snacking. At night, I ate ice cream. Sunday was much the same.

So this morning I go back to the gym and did the same 30/30 workout. One thing that I've noticed ... after I finish playing basketball on Tuesdays and Thursdays, I'm really thirsty and tired. But when I do the 20/20 workout, I'm not so thirsty. But on Saturday and again this morning when I did the 30/30, I was just as thirsty and tired as when I play basketball ... so that 30/30 workout is more like playing basketball in that regard.

After showering, I step on the scale.

Same time of day, same scale with just the towel.

Over the last couple of weeks, I've rededicated myself to strictly following the "diet" and I'm seeing results.

I've added a new step in my routine ... every morning before going to the gym, I pop in three flax seed oil capsules. Then I go do my workout. After showering and driving into work, I serve myself a healthy dose of sugar water with a tablespoon of walnut oil. Then I drink lots of water and chew gum (I wait an hour after the SW and WO before I chew gum) until it's lunch time. For lunch ... the usual ... apple, granola bar and yogurt. Three o'clock rolls around and I take another 1 to 2 tbsp of WO. After the drive home, I eat dinner ... usually something light. This week and last week I'd usually eat a salad ... lettuce, cherry tomatos, cucumbers, a little cheese and some crackers and then I mix in some sun-dried tomato dressing. If I'm still hungry, I'll eat some more crackers or even have some fruit. And that's it ... I might drink some more water, but I'll be done eating for the night.

The beauty of the diet lies in the fact that I feel full after eating these seemingly small amounts of food. Pre-shangri-la diet, I could eat a salad and then go on to eat a full course meal and then I'd feel full. Now, when I eat a salad, I feel full ... similar to how I'd feel after eating a full course meal. My body just says "no" to more food. I mean, I could eat more, but the urge isn't there like it was before going on the Shangri-la diet.

This morning I took an official weigh-in.

As always, same time of day, same scale with the towel.

The previous low was 188.9 and that came about unexpectedly. This 188.4 weight came gradually. I didn't drop an entire pound from one day to the next. Each day was a little less as opposed to a lot less. So my point is this ... I think I finally broke the 190 barrier that I've been hovering at for the past few weeks now.

Tomorrow will be a workout day ... run 20 minutes, bike 20 minutes. I need to keep up with the good eating habits ... which by the way are much easier to keep now that my wife is on board. She is turning into a health nut and I love it! She's back in the gym, eating great and shedding pounds now. Just like me, she's averaging about 2 pounds a week in the early going.

I'm finding that 5 pounds are harder to lose than 25 pounds.

I'm still on the "diet" and probably will always be for the rest of my life. There was a week when I didn't take any oil or sugar water. By the time I entered the 2nd week of no oil, I noticed a notable increase in hunger. I didn't eat too healthily during that period.

So now I'm back on the saddle. I'm determined to lose these remaining five pounds.

In the morning (for breakfast), I'm drinking sugar water with a tbsp of walnut oil. I'm still eating a light lunch. I've replaced GoldFish crackers with a granola bar ... so I eat an apple, a cup of yogurt and a granola bar for lunch. For dinner, I'm trying to eat healthy. Since my wife is trying the diet, she's going to serve me and her salad for dinner every night.

Not that it is part of the official diet, but I'm also taking flaxseed oil capsules every day. I'm convinced of the benefits of Omega 3's. Obviously I'm getting O3's with the walnut oil too. I have noticed that I think much more clearly since taking more O3's. I don't know how to measure it, other than I just feel like I can think more clearly. The only shred of evidence I can offer has to do with chess. I'm going through dozens of chess problems every day in an effort to improve my chess game. Whether out of sheer practice or because of the O3's, I seem to be solving the problems with greater ease and speed these days. But like I said, there really is no hard data that shows a correlation between quickly solving these tactical chess problems and (only) taking O3's.

I'm continuing to exercise. I play basketball Tuesdays and Thursdays and sometimes on Saturday. Then I'll try to get to the gym two other days during the week to bike and run or swim.

I continue to get unsolicited comments about my appearance. Just yesterday I was walking into work when one of the security guards, who rarely speaks to me, called me over and asked me if I had been losing weight. He said I looked a lot younger. It's such a great feeling when someone compliments me on my weight loss.

This morning I pulled myself out of bed to go to the gym since I missed Monday. I ran for 20 minutes and biked for 20 minutes. I was as wet as a soaked sponge when I was done with my workout. Now that the temperatures have cooled off here in Texas, the water can actually get cold at night ... so my showers are very refreshing these days.

I weighed in this morning.

As always, I weighed in at the same time of day on the same scale with just the standard issue white gym towel around my waist.

That is all for this week's update. I hope to report back next week that I'm closer to my goal of 185 lbs.
Posted by rockyrook at 9:52 AM No comments: