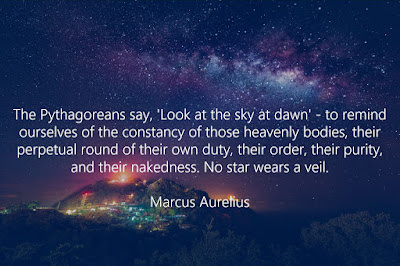 Socrates used to call the popular beliefs 'bogies', things to frighten children with.

At their festivals the Spartans would put seats for visitors in the shade, and sit themselves wherever they could.

Socrates to Perdiccas of Macedon, declining the invitation to visit him: 'to avoid dying the worst of deaths' - that is, the inability to return in kind benefits received.

In Epicurean writings there is laid down the precept that one should continually keep in mind one of those who followed the path of virtue in earlier times.

The Pythagoreans say, 'Look at the sky at dawn' - to remind ourselves of the constancy of those heavenly bodies, their perpetual round of their own duty, their order, their purity, and their nakedness. No star wears a veil.

"Bogies" frightened children in Socrates' day.  Things that may frighten children these days would be monsters under the bed or closet, a test in school, a teacher, a mythical clown who lives in the sewer drains or demons.  None of these things are real - they are made up - imaginations in our heads.  Popular beliefs are similar.  The idea that riches, possessions, a bigger home, more cars and clothes will bring you happiness, is false - it is made up in our heads.  The same goes for finding fame and achieving immortality before your body dies.

Being kind to others and putting others first - this is what the Spartans did with regard to their festivals.

Socrates would decline invitations if he could not repay in kind.

How useful to always kind in mind a sage or someone who is close to becoming a sage.  Marcus Aurelius, Seneca and Epictetus are good examples.

The stars keep order and do their duty.  Humans should do likewise, without pretense.