Under the Black Flag by David Cordingly 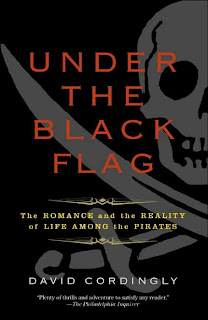 This book seemingly has it all when it comes to Pirate lore.  It feels as though no stone was left unturned in revealing (if at least anecdotedly) the broad scope of the history of piracy on the high seas.  Where possible, the author goes into much detail.  But with a few of the stories, he can only offer what history has uncovered which can be very little when it comes to the topic of Pirates.

When this book was first written in 1995 (the edition I'm reading), the Information Age was just barely picking up steam.  Today, however, much of the information found in this book is also logged in wikipedia or other sites.  But without this book, learning about such a broad topic via wikis would be time-consuming and dis-organized.  Cordingly's book, therefore, provides a nice one-stop shop to get the bulk of information on Pirates.

Below is a list of links I've found as I read the topics covered in the book.  I've placed an asterisk next to those topics I partcularly enjoyed.

John Rackam (Calico Jack); Mary Read; Anne Bonny (the wikipedia entry on Anne gives additional information about her post-trial disappearance, which is not included in the book); A General History of Pyrates by Daniel Defoe / Captain Chales Johnson; Alwilda; Grace O'Malley; Mrs. Cheng (the book has a lot of details on her);

"It is curious that Bartholomew Roberts has never acquired the fame of Blackbeard or Captain Kidd, because he was infinitely more successful than either of them, and was a considerably more attractive figure.  He was tall and dark, 'of good natural parts and personal bravery,' and adopted a magisterial air.  He dressed in some style, and was apparently fond of music.  Unlike the vast majority of his fellow pirates, he abstained from heavy drinking, and he discouraged gambling on his ships.  He was born near Haverfordwest in the southwest corner of Wales around 1682.  He joined the merchant navy and eventually became second mate of the ship Princess of London.  In November 1719 the Princess under the command of Captain Plumb, set sail for the west coast of Africa to collect a cargo of slaves for the West Indies.  On her arrival at Anaboe on the Guinea coast, the Princess was captured by pirates led by another Welshman, Howell Davis.  A few weeks later Davis was killed and Roberts was elected as pirate captain in his place; in a remarkably short time he had impressed an unruly bunch of men with his abilities as a seaman and navigator, and was chosen above several other candidates for the post.  Captain Johnson tells us that Roberts accepted the post, 'saying that since he had dipped his hands in muddy water, and must be a pirate, it was better being a commander than a common man.'

"Not only was Roberts a natural leader, but he also proved to be absolutly ruthless.  His attacks were swift and savage, and he had no qualms about resorting to torture and murder to achieve his ends.  During the course of the next three years he caused havoc among the merchant shipping on both sides of the Atlantic.  In 1721, at the height of his career, Roberts commanded a squadron of four vessels.  His flagship was the Royal Fortune of forty-two guns, a former French warship.  His consorts were the thirty-gun brigantine Sea King, the French ship Ranger and a small ship of sixteen guns which was used 'as a store ship, to clean by.'  The total number of men under his command at this time was 508."

Another section from chapter six describes a little of red flags and their meaning.

"There was an alternative meaning tot he plain red and black flags.  A French flag book of 1721 includes hand-colored engravings of pirate flags, including a black flag with various insignia, and a plain red flag alongside a red pennant.  Under the red flags is written "Pavillon nomme Sansquartier" ("Flag called No Quarter").  The idea that a red flag could mean no quarter is confirmed by Captain Richard Hawkins, who was captured by pirates in 1724.  He later described how "they all came on deck and hoisted Jolly Roger (for so they call their black ensign, in the middle of which is a large white skeleton with a dart in one hand, striking a bleeding heart, and in the other an hourglass).  When they fight under Jolly Roger, the give quarter, which they do not when they fight under the red or bloody flag."
*Alexander Selkirk (marooned on an island for 4 years).

The last few chapters about how pirates were caught and tried and died and how England squashed piracy all together in the Caribbean were quite fascinating.  It is interesting to note that as soon as England put it's mind to it and began focusing on destroying the pirates, they were able to do so quite easily.  The main reason piracy went on for so long was because there was no force large enough to take the pirates on.  Once the Royal Fleet began engaging the pirates, piracy quickly came to an end.

If I ever get the chance, I'd like to read the book entitled The Republic of Pirates by Colin Woodard.  It sounds like it delves deeply into the history three pirates (Bellamy, Blackbeard and Vane) and the man who brought an end to piracy in the Caribbean (Woodes Rogers).

Why such an interest in Pirates?

Honestly, I think it was the Pirates of the Caribbean movies that really piqued my interest.  Those movies seem to wrap all the pirate lore into 460 minutes of action, romance and intrigue.  Is it the free-nature, open-seas adventure of pirates?  Maybe it's the allure of striking it rich and living a life of ease that makes it appealing.  Cordingly does a good job of summing why we are enamored with pirates, "They were expected to be bold and decisive in action, and skilled in navigation and seamanship.  Above all they had to have the force of personality necessary to hold together an unruly bunch of seamen.  The pirates who operated in the West Indies were drawn from a number of seafaring nations and many were black salves, so there was no sense of national identity to unite them.  Most pirates were by nature rebellious and lazy.  They came together in an uneasy partnership, attracted by the lure of plunder and the desire for an easy life." (p. 12)

Indeed this was a fascinating book with lots of history in it to soothe the pirate of any of us.
Posted by rockyrook at 4:34 PM No comments: