Commentary on Meditations: B11:1 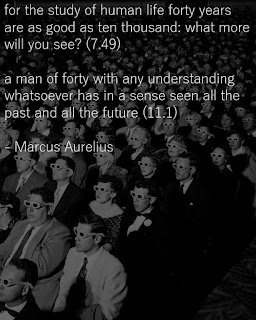 The properties of the rational soul. It looks on itself, it shapes itself, it makes itself however it wishes to be, it gathers for itself the fruit it bears - whereas the fruit of plants and the corresponding produce of animals is gathered by others. It achieves its own end wherever the limit of life is set. Unlike a ballet or a play or suchlike, where any interruption aborts the whole performance, in every scene and whenever it is cut off the rational soul has its own programme complete and entirely fulfilled, so it can say: 'I am in possession of my own.'

Further, the rational soul traverses the whole universe and its surrounding void, explores the shape of it, stretches into the infinity of time, encompasses and comprehends the periodic regeneration of the Whole. It reflects that our successors will see nothing new, just as our predecessors saw nothing more than we do: such is the sameness of things, a man of forty with any understanding whatsoever has in a sense seen all the past and all the future.

Particular qualities too of the rational soul are love of neighbour, truthfulness, integrity, no higher value than itself. This last is a defining quality of law also. There is thus no difference between the true principle of philosophy and the principle of justice.

Of all the objects and creatures in the universe known to humans, only humans are fully rational agents.  No other living organism known to humankind, has the ability to think about itself the way humans do.  The "fruit" of humans is outlined by philosophy.  For Stoics, the fruit is producing a virtuous life.  Humans can be virtuous ("grow the fruit") and reap the benefits ("pick the fruit").  Also, humans can achieve what they were designed for, the moment they act with virtue.  There is no long process that leads to a pinnacle and then it is over.  Rather, humans constantly live in the now.  Whereas a concert, movie or play reaches the end and it is fully developed and complete, humans, on the other hand, always live in the now - in this time and this space.  Eternity is not some far distant future or past.  It is now.  If you were to draw a line that represents eternity, at what point do you reach it?  The answer is: the moment you are on it - which is now.

Humans have the capacity to think about time and space and ponder what the universe is really about.  I don't think Marcus means we physically travel the whole universe, rather we can contemplate it and see that all that has happened before, happens now and will happen again.  Therefore, according to Marcus, a forty-year-old man has seen just as much as a man who could live ten-thousand years.

Humans fulfill their design when they act rationally out of love for neighbor, when they speak and act truthfully and are full of integrity (consistent in thought, speech and actions).