Socrates was unwavering and was devoted to the god (his daimon) and his country.  Through heeding his daimon, he remained loyal to the god.  Through military service and concern for the citizens of Athens, including his accusers, he remained loyal to his country.  His allegiance to his daimon enabled him to pursue a life dedicated to love and care for himself and others.  Plato’s dialogues provide evidence of a Socrates who cared not for wealth, land, offices of authority, power or even his life, but rather his only concern: devotion to philosophy and helping others care for their souls (Plato, et. al., Apology 30a, 36b).  From his early childhood experiences with his daimon, to his courage on the battlefield, to his stalwart care for the state and citizens, Socrates embodied his philsophy.  In her PhD. thesis, Abigail Fritz summarizes, “Socrates is, and always has been, concerned with whether his behavior is just, without regard to his personal safety” (Fritz, 76).  His pattern of devotion began in childhood with the introduction to his daimon.

There is no specific account or detail surrounding how Socrates first encountered his daimon, other than when he states that it had been with him since childhood, and it prevents him from doing something that he ought not (Plato et. al., Apology 31d).  What is known, is that he remained devout to the god by acknowledging, and adhering to oracles and divine dreams, and to examine people’s lives including his own (33c).  Not once did he succumb to the pressure to lower himself by disobeying the divine; he stood his ground on this matter like he stood his ground in pitched battle.  Socrates’ ultimate commander was the god – his daimon – and when Socrates was called to his station by his commander, he remained there “steadfast in danger, taking no account at all of death or anything else” (28d).  And this station, at which he faithfully stood, was to live philosophically.  As one modern professor of philosophy wrote: “Insofar as Socrates’ god demands of men that they live philosophically, insofar as the station at which the god stations Socrates is philosophy, it follows that to do as the god demands is to be the very opposite of uncritically submissive”  (Weiss, 85).  His qualities of determination and loyalty not only applied to his daimon, but they were also demonstrated on the battlefield.

Socrates fought in three pitched hoplite battles: Potidaea in 432 B.C.E., Delium in 424 B.C.E, and Amphipolis in 422 B.C.E. (Ambury).  History books describing hoplite battle are replete with descriptions of soldiers succumbing to “gaping wounds to the unprotected neck and groin, involuntary defecation and urination, and panic” (Hanson, 144).  These pitched battles absolutely required “weight and discipline” and “the greater cohesion and thrust of the column, the more likely it was for a phalanx to shove itself over and through the enemy” (144).  Soldiers who selfishly abandoned their comrades were derided as a “shield tosser” or a “throw-awayer” because they “threatened the integrity of the phalanx and revealed the hoplite’s worry about his own, rather than the group’s, survival” (145).  Socrates was not a tosser but exhibited strength and stamina as a “good citizen … who always [held] his shield steady and right, and [stayed] in rank in the phalanx” (145).  In other words, Socrates demonstrated his devotion to his citizens by remaining resolute in battle, caring more for this fellow citizens than himself.  Fritz draws a parallel to Socrates’ actions on the battlefield to his “commitment to the philosophical life” as both activities help the state, as well as put one in danger of death (77).  Socrates’ willpower to hold rank on the battlefield, prepared him for engaging in the philosophical and cultural arena of Athens, in defense of his city comprised of fellow citizens and even accusers.

Socrates loved his city and her citizens.  The only entity he held in higher esteem than the city, was the god.  In persuading Crito as to why he will not escape his death, Socrates tells Crito that he “must treat [his] fatherland with piety, submitting to it and placating it more than [he] would [his] own father” (Plato, et. al., Crito 51b).  Not once in his 70 years of life, did he break the law (Apology 17d).  Furthermore, he was willing to engage with anyone and everyone in the city to persuade it to care about the most important things, even in the face of hostility (36b-c, 21e).  And finally, the ultimate hostility he faced was being accused of impiety and corrupting the youth and subsequently being brought to court for the first time in his life (24b-c).  But despite these accusations, he still had care and concern for his accusers.  So great was his devotion to the god, the city, and his fellow-citizens, he supplicated his accusers, “I’m far from pleading in my own defense now, as might be supposed.  Instead, I’m pleading in yours, so that you might not commit a great wrong against the god’s gift to you by condemning me” (30e).

In sum, Socrates was resolute, faithful to his daimon and to his country, through military service and an unyielding concern for the citizens of Athens, including his accusers.  His loyalty to the god and his country prodded him to never mind his own business and instead, to be the unrelenting gadfly (29d, 37e-38a, 30e-31a).  In all that he did, he stood as a shining example of one who was truly a lover of wisdom and one who embodied it.  Pierre Hadot’s extensive research in this area succinctly captures this ancient idea of a lived philosophy.  “Philosophy was a way of life, both in its exercise and effort to achieve wisdom” (265).  Socrates’ devotion to wisdom, as applied to his fellow citizens, demonstrated the way in which humanity is to pursue the examined life: through dialogue and embodiment of one’s philosophy.

Fritz, Abigail R. The Life of Socrates: Plato, Xenophon, and the Untapped Potential of

Victor Davis Hanson. A War like No Other : How the Athenians and Spartans Fought the Peloponnesian War. Random House, 2006.

Posted by rockyrook at 5:00 AM No comments:

Raphael's School of Athens: Is it Heraclitus or Epictetus?

Towards the end of 2020, while doing some work on a college research paper, I found an image of Epictetus I had never seen before.  I was exploring my college's various research engines and one of my searches yielded an image from the British Museum; an drawing of Epictetus.

You can find the print here: https://www.britishmuseum.org/collection/object/P_1935-0828-5

The description states, "Epictetus: bearded man seen head and shoulders, head resting on his left hand; on white ground; detail from the School of Athens, after Raphael" 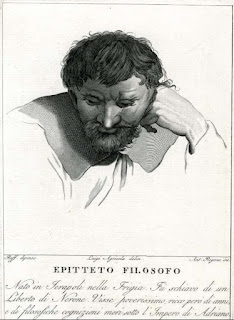 The artist who drew this image of Raphael's School of Athens is Antonio Regona and he would have drawn it sometime between 1775 and 1853, according to the site's data on 'production date.'
He drew other objects from the School of Athens; see this link to his works at the British Museum: https://www.britishmuseum.org/collection/term/BIOG191367
Now to the question.  As I've studied a bit about the painting, I've come to learn that there seems to be wide consensus that the image that Antonio Regona claims is Epictetus, is in fact Heraclitus.
The wikipedpia page on the painting claims it is Heraclitus: https://en.wikipedia.org/wiki/The_School_of_Athens
The site Art in Context claims it is Heraclitus: https://artincontext.org/the-school-of-athens-raphael/
But perhaps the best information or analysis on this figure comes from the BBC and talks a bit more extensively about him: https://www.bbc.com/culture/article/20200910-the-school-of-athens-a-detail-hidden-in-a-masterpiece
This article, too, claims he is Heraclitus, but also notes that this figure and many of the other figures are deliberately ambiguous.
So, perhaps, Antonio Regona may have known more about this figure or he chose to not claim this figure as Heraclitus, but Epictetus.  Perhaps Regona had seen another image of Epictetus by William Sonmans - the image that many of us may be more familiar with (link: https://commons.wikimedia.org/wiki/File:Epicteti_Enchiridion_Latinis_versibus_adumbratum_(Oxford_1715)_frontispiece.jpg)  This image would have been created prior to 1715 and would pre-date Regona's drawing. 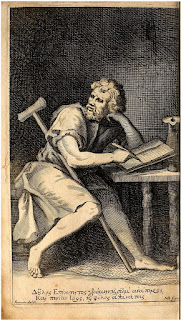 Both images show Epictetus, holding his head up with his left hand, while writing.  Perhaps these two clues are why Regona claims the figure in the School of Athens is Epictetus and not Heraclitus.
In conclusion, it's a interesting mystery and piques my curiosity about why would Antonio Regona call that figure Epictetus and not Heraclitus.
Posted by rockyrook at 5:00 AM No comments: