Life Gets in the Way Sometimes 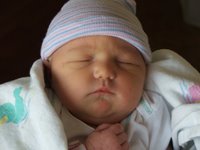 I'm still going. We recently welcomed our 4th child into the world.

She and her mother are doing well. Despite the long days of watching the other 3 squids, I've managed to stay on the diet relatively well.

I played basketball on the 25th and weighed in as usual.

I was so proud of myself after that weigh-in that I loosened up a little. I get curious about whether I can gain weight because the pounds seem to come off so effortlessly. So I pigged out on my mother-in-law's potatoes, green-bean casserole and spiral-cut ham. I ate big dinners and lunches on Wednesday and Thursday.

Thusday morning came around and I was on the basketball court again. About 30 minutes into my workout, I felt a tightness in my left calf muscle. It hit me right when I cut to the basket for a layup. I thought it was cramps because that's what it felt like, but the pain persisted especially when I tried to run. I stopped and tried to stretch it and massage it, but the pain didn't leave. So I had to shower early. It was painful to put pressure on it the rest of the day. I looked up my symptoms on WebMD and it turns out that it's a muscle strain.

This morning when I woke up, the pain was considerably less. I can walk "normally" now without limping. So I'll give it some rest until next Tuesday and then see how I'll do on the court.

Anyway, I weighed in Thursday morning too.

Yesterday I had a really good day on the diet. I took the WO in the morning and then ate a McDonald's salad. Then I drank WO in the afternoon. I went to class that night and then didn't eat anything until I got home. When I got home, I just ate a ham sandwich. I really wasn't hungry all day long.

I havn't been taking the flax seed oil capsules lately ... just been forgetting. But I have been continuing to get some good sleep.

Anyway ... I'm still here. I probably will only post once a week until I hit 185 (which should be around the middle of September).
Posted by rockyrook at 9:13 AM