Epictetus Discourses 3.22 - On the Cynic calling 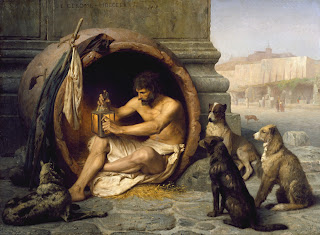 On the calling of a Cynic
Who doesn't love a good dog!  Especially an under-dog!  The greatest dog of all time was Diogenes.

Cynicism, as practiced by Diogenes, shocked people in the ancient world.  Not that he was a mentally, unstable, unhealthy bum, but rather he was fit, strong, healthy and yet still lived homeless.  To give you a taste for Diogenes ...

"Diogenes was once invited to dinner by a wealthy man. During the evening, one of the guests became so outraged by Diogenes’ general behavior that he began to throw bones at him, calling him a “dog.” Whereupon Diogenes got  up, went to the guest, cocked up his leg and urinated on him."(source)

He lived in a barrel.

He pleasured himself in public.

He begged for food

He only wore a tunic.

And he was called a dog.  The name Cynic comes from ancient Greece, meaning 'dog-like'.

That is the burning question and Epictetus reveals the answer.  Epictetus admired Diogenes and often used Diogenes' as a good example of Stoic behavior.

Epictetus was quick to point out that wearing nothing but a tunic, sleeping on the ground, not shaving, begging - all these behaviors - do not make one a Cynic.  It goes deeper.

Epictetus begins to explain why Diogenes acted the way he did; and in so doing, he teaches us Stoicism too.

"First of all, with regard to what concerns you directly, you must no longer show yourself to be behaving in any respect as you do at present; you must bring no accusation against either god or man; you must suppress your desires wholly and completely; you must direct your aversion only towards things that lie within the sphere of choice; you must harbour neither anger, nor malice, nor envy, nor pity; you mustn’t find any wench beautiful, nor any scrap of reputation, nor any boy, nor a honey-cake. For you must be clear in your mind about this point, that other people have walls and houses and darkness to protect them when they venture on anything of this kind, and have many means by which they can hide it away. A man shuts his door, he stations someone in front of his bedroom, saying, ‘If anyone comes along, say: he’s out, he’s busy.’ But the Cynic, in place of all these defences, must make his own self-respect his source of protection; or else he’ll be disgracing himself while he’s naked and in the open. His self-respect is his house, his door, the watchman in front of his bedroom, and his darkness" (v. 13-15, p. 182-183).

Whereas some will hide behind walls to indulge in pleasure, Diogenes, other the other hand, intends to put as little between him and the rest of the world.  This is extreme transparency.  There is no shame, fear, anxiety.  He bares (and bears) all.  The Cynic man is "the man of the open air."  The only medium, in the Cynic's art, is his mind - nothing else.  The start of the Cynic's duty is to train the mind; and so it is with Stoicism too.

Observers may scoff at the idea of possessing as little as possible and wonder how one can be content with nothing.  Diogenes would reply, "Look at me, I am without a home, without a country, without possessions, without a slave. I sleep on the ground. I have neither wife nor children, nor a governor’s palace, but only the ground and sky and a single rough cloak.  And yet, what do I lack? Isn’t it the case that I’m free from sorrow, free from fear? Am I not free? When did any of you ever see me failing to attain what I desire, or falling into what I want to avoid? When have I ever cast any reproach at god or man? When have I ever accused anyone? Have any of you ever seen me with a sad expression on my face?  How do I treat those who inspire you with fear and awe? Don’t I treat them as though they were slaves? Who, on seeing me, doesn’t think that he’s seeing his king and master?" (v. 45-49, p. 186).

Diogenes contrasted with those who sought contentment and happiness in food, women, possessions or fame.  He further contrasted with people who would be upset and angry when they did not get what they wished or when things did not go their way.

While others sought the thrills of watching athletes compete, Diogenes, who was ill with fever, would yell at them as they passed, "You wretches, aren’t you going to stop? You’ll travel all the way to Olympia to see wrestlers and athletes do battle with one another, and yet you have no wish to see a man fighting it out with a fever?" (v. 58, p. 187).

Later on, Epictetus describes how Diogenes wasn't some ordinary bum; but rather a person with a fit body and an attitude of a gentleman: "It is also necessary, however, that the Cynic should have the right kind of body, because if he comes forward looking like a consumptive, all thin and pale, his witness would no longer carry the same weight.  For he must not only prove to laymen, by displaying the qualities of his mind, that it is possible to be virtuous and good without having the things that they set such store on, but he must also show through his bodily qualities that a plain and simple life lived in the open air has no deleterious effects even on the body.  ‘Look, both I and my body bear witness to that truth.’ That was the way of Diogenes, for he would walk around radiant with health, and would attract the attention of the crowd by the very condition of his body.  But a Cynic who arouses pity passes for being a beggar; everyone turns away from him; he arouses everyone’s disgust. Nor should he look dirty, so as not to scare people away for that reason too, but even in his destitution, he should be clean and attractive" (v. 86-89, p. 191).

His radical acceptance makes him pure.  "He sees that his every thought is that of a friend and servant of the gods, as one who shares in the government of Zeus, and is ready to say on every occasion, 'Lead me, O Zeus, and thou, O Destiny' and 'If this is what pleases the gods, so be it,'" (v. 95, p. 192).

Lastly, his endurance to physical and verbal abuse mush be unmatched.  "A Cynic must have such powers of endurance that he strikes the crowd as being insensible and like a stone. No one can insult him, no one can strike him, no one can assault him; as for his poor body, he himself has handed that over for anyone to deal with as he thinks fit.  For he keeps in mind that what is weaker must necessarily be overcome by what is stronger, in that respect in which it is weaker, and that his body is weaker than the crowd, as what is physically weaker must be to what is stronger.  So he never enters into this contest in which he can be defeated, but renounces once and for all what is not truly his own, laying no claim to what is slavish" (v. 100-102, p. 192).

Marcus Aurelius uses a similar metaphor in the "rocky headland," as an example of unwavering endurance to brutality (see Meditations 4.49).

Indeed, nothing frightens Diogenes.  He cares not for his body, possessions, honors or career.  "When anyone tries to scare him by means of such things, he says, 'Go and look for some children; they're afraid of empty masks, but I know that they're made of clay and have nothing inside them.'" (v. 106, p. 193).

In summary, Epictetus attempted to describe, to his students, the Herculean  effort it would require to embrace the Cynic life.  He even begged them to "take some time to judge [their] aptitude" for becoming a Cynic.  It is not for the faint in heart, rather, it is all out war.
Posted by rockyrook at 5:00 AM