Epictetus Discourses 3.21 - To those who set out to become lecturers without due thought

To those who enter light-heartedly upon the profession of lecturing
In this chapter, Epictetus lays out who should and should not be able to teach philosophy as well as what it takes to make progress.

Philosophical principals ought to be "digested" first.  To me, it seems like he's saying we ought to really think about what we learn from Stoicism and how we can apply it to make progress.  If we simply memorize ideas and phrases, only to vomit it back up, then there is no actual benefit.

The benefit of food is to actually digest it, which is then converted to energy and maintenance of the body.  But if you always vomit the food after eating it, you will never derive the benefit of food.

The same goes for philosophy.  Learn it; think about it; apply it; show what you have learned - "show us some resulting change in your ruling centre" (v. 3, p. 179)

He uses a builder as another analogy.  "A builder doesn't come forward and say, 'Listen to me as I deliver a discourse about the builder's art,' but he acquires a contract to build a house, and shows through actually building it that he has mastered the art" (v. 4, p. 179). 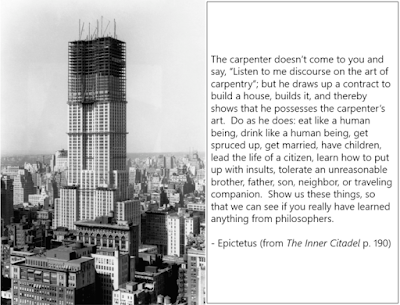 The art that philosophy is focused on, is the art of living.  Therefore, once you have learned philosophy and have thought about how to apply it, then show the world what you have learned.  "Eat as a proper human being, drink as a proper human being, dress, marry, father children, perform your public duties; put up with being abused, put up with an inconsiderate brother, put up with a father, a son, a neighbor, a fellow traveller.  Show us these things to enable us to see that you really have learned something from the philosophers" (v. 5-6, p. 179).

He later provides additional examples of people who are actually living the philosophy.

"people who are patient and helpful towards others, and have minds that are free from passion and agitation, and are furnished with such provisions for their journey through life that they'll be able, by that means, to face up well to everything that comes about, and draw honour from it" (v. 8-9, p. 179).

And if you're going to set up a school for philosophy, then you'll need to be wise, have a special aptitude and predisposition, a particular physique and a vocation from God to fulfill this function (v. 18, p. 181).
Posted by rockyrook at 5:00 AM