Epictetus Discourses 3.3 - What is the material that the good person works upon, and what should be the main object of our training?

What is the subject-matter with which the good man has to deal; and what should he the chief object of our training?
Artists work with paint; sculptors with marble - the good man works with his mind.

"The material that the good and virtuous person works upon is his own ruling centre" (v. 1, p. 149).

"Never will the mind refuse a clear impressions of the good, any more than a man, will refuse Caesar's coinage.  On this hangs every action of both man and god" (v. 4-5, p. 149-150).   In other words, the good is as easy to distinguish as a minted coin.  If someone pays you a quarter, it should be rather easy and quick to determine if they are giving you $0.25 or not.  Likewise, if you see someone act with wisdom, justice, courage or discipline, it should be quite apparent that they are acting according to the good.

And although your father or brother may waste your inheritance, you must ask if they will take "your decency ... loyalty ... or ... your brotherly love" (v. 9, p. 150).  It's absurd to think they can take these things from you!  Therein lies the answer to "what is good?"  Virtue is the sole good!  And you can get this from yourself!  You don't have to compete with others for it.  You don't have to wait on it; you don't have to pay for it - rather, you simply have to make it your 'guiding star' - the center of your world-view and paradigm.  Your undeniable, unalterable "currency" is virtue -  it's what makes you tick.

Others' currency can be found by 'flashing' it in front of them.  If he is guided by money, then he can be paid off with coins.  If it is food, then delicious food.  It is the god he worships.

"It is in accordance with this plan of action above all that one should train oneself. As soon as you leave the house at break of day, examine everyone whom you see, everyone whom you hear, and answer as if under questioning. What did you see? A handsome man or beautiful woman? Apply the rule. Does this lie within the sphere of choice, or outside it? Outside. Throw it away.  What did you see? Someone grieving over the death of his child? Apply the rule. Death is something that lies outside the sphere of choice. Away with it. You met a consul? Apply the rule. What kind of thing is a consulship? One that lies outside the sphere of choice, or inside? Outside. Throw that away too, it doesn’t stand the test. Away with it; it is nothing to you.  If we acted in such a way and practised this exercise from morning until night, we would then have achieved something, by the gods." (v. 14-16, p. 150-151)

We must watch for, what Epictetus calls, "vicious judgements" and that we should do all that we can to root them out (v. 18, p. 151).  They are insidious because they erode the most sovereign and absolute philosophical concepts: virtue is the sole good and it can be found from within by the working of our own will.

Some examples of vicious judgements: you see a person mourning and you think "she's crushed."  Rather think, it is nothing to me - it's indifferent and this person could be content if they did not desire to find happiness in others.  You see a rich man or woman and you think "There goes one lucky man!"  Rather think, money does not make one happy nor lucky!  You see a poor beggar and you think "poor guy, he doesn't even have money enough for food."  Rather think, this beggar, despite his predicament, could find contentment.  Indeed, this is hard for some to accept or live by.  But as long as people, like these, try to find contentment in things that lie outside themselves (externals), they will be frustrated and experience fear and anxiety.

A similar exercise, applied in today's modern social media environment, is to observe your reactions as you scroll through Facebook or Instagram.  Do you feel a twinge of envy or jealousy when you see "that perfect family, on the perfect vacation"?  Pause.  Think about what it is you are wanting.  Do you want those externals or do you want virtue more?  You must question these value judgements; you must question the premise of impression.  If it is in your control and is virtuous, then seek it; desire it.  But if it is an external and out of your control, forget it.  It means nothing.

He finishes the chapter with an allegory.  "The mind is rather like a bowl filled with water, and impressions are like a ray of light that falls on that water.  When the water is disturbed, the ray of light gives the appearance of being disturbed, but that isn’t really the case.  So accordingly, whenever someone suffers an attack of vertigo, it isn’t the arts and virtues that are thrown into confusion, but the spirit in which they’re contained; and when the spirit comes to rest again, so will they too." (v. 20-22, p. 151) 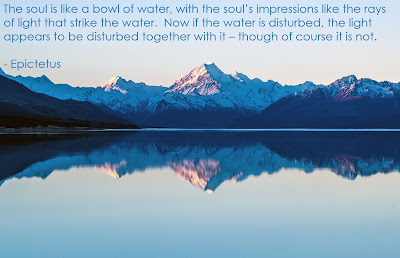