Commentary on Meditations: B5:13 eternal return or recurrence

I am made up of the causal and the material. Neither of these will disappear into nothing, just as neither came to be out of nothing. So every part of me will be assigned its changed place in some part of the universe, and that will change again into another part of the universe, and so on to infinity. A similar sequence of change brought me into existence, and my parents before me, and so back in another infinity of regression. Nothing forbids this assertion, even if the universe is subject to the completion of cycles. 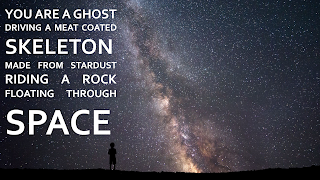 We may think of ourselves as so important - a king, a queen, a president, a diplomat, a wealthy landowner, a CEO or vice president, a very well-paid manager, an NFL quarterback, an all-star basketball player in the NBA, an Olympic gold medalist, a celebrity, a movie star, mayor - I could do this all day.  No matter how much importance you put on your life, no one can dispute that you are nothing more than water, carbon, stardust ... this directing mind or soul, inside a bag of bones carrying meat, living on a rock flying through space.  And furthermore, you have no power or control over what happens to that bag of bones on a rock floating in space.

Marcus, along with the Stoics, seems to think that we live multiple iterations of our life - that the universe expands and contracts and all that has happened will happen again.  This is called eternal return.  The link provided does a nice job summarizing this concept.  Also see this link for a couple of articles on the idea of eternal return (especially read the one call Eternal Recurrence: Nietzsche and the Stoics).

So, what does this idea of eternal return have to do with living now?  In the article I linked to above, Nietzsche asks the question: what if you knew you had to live the same life, over and over and over again?  I suppose many would shun the thought, thinking only of the suffering they've had to endure.  But what if you could 'pass the test' and accept your fate (amor fati) and turn your life into a work of art?  What if you could realize you truly have no control over the fact that the universe repeats itself endlessly?  What if you could realize that it is your opinion of your fate that could be flipped to an accepting and even loving opinion?  Would this not aid you in your quest to find contentment and happiness?

I'll finish with a quote from the Eternal Recurrence: Nietzsche and the Stoics article, which does a nice job summarizing the Stoic point of view.

The Stoics had their own way of passing the ‘eternal recurrence test’, differing to be sure from Nietzsche’s but requiring just as much psychic effort and self-fashioning. Their strategy was to train themselves to look at everything from the perspective of universal Nature. If, as they insisted, this is really the best of all possible worlds, governed by a perfect divine Providence, then anything that actually happens at any point must be the best thing that could happen at that point. Certain things may look negative to us, but that is merely a result of our looking at them from within a limited human perspective; could we but see them as God sees them, we would perceive how they are indeed for the best, and we would be able to desire them as God desires them. Clearly it is not easy to acquire such an attitude in respect of all things that happen in our world, so the Stoics performed spiritual exercises to help them; much of what Marcus Aurelius writes in his Meditations amounts to an effort to escape the limits of his own viewpoint and reform his consciousness in likeness to God’s. ... Both strategies for embracing eternal recurrence are an ongoing effort to change the way we perceive, and both acknowledge that this is not a simple matter, for the means of re-fashioning our minds are never simply given to us – we have to be creative.