The Soul of Battle Part 2 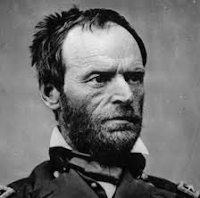 There were so many things discussed on the second part of the book.  Indeed it was about William Tecumseh Sherman, but it wasn't only just about his march through the South, but it was also about the man, a bit about his background, and why he, of all the generals, was the perfect candidate to finish the Civil War with his unprecedented march.

I can't recall everything that I found fascinating with the second part of the book, so I'll just write what I remember as having struck me as significant.

The Man - he was essentially a failure for most of his life.  He attended West Point with several other future generals.  He served many years in the military, but only as a captain.  While others saw battle in the Mexican-American War, he sat on the side-lines and saw no action.  He experienced failure as a banker and businessman.  His wife came from a wealthy family and thus he felt he needed to "strike it rich" to support her lifestyle.  He was one of the founders of LSU.  He eventually was recalled into the service.  But after a short while, he suffered a mental breakdown.  He then, miraculously, survived the battle of Shiloh.  He eventually lived to carry out the march that this book discusses extensively - the March to the Sea and then the campaign into the Carolinas.

The March - Hanson discusses how several people, including Grant and Lincoln, probably would not have agreed with Sherman's march into the South.  But he was given leeway to do as he chose.  He cut off his supply lines and his 60,000 plus army marched through the South, living off the land and plantations while obliterating the Confederate nation and those who supported the Confederate army.  His idea, in a nutshell, was to bring war to those who started it.  He felt that he needed to reveal the hypocrisy of the South's way of life.  The South - or the elite plantation owners - wanted to preserve slavery.  And they sent thousands of young men to defend that way of life, many of which were not slaver-owners.  Sherman proposed to strike at the heart of the desires of those elite plantation owners - their property.  If they had nothing left to hold on to, the war would be over - slavery would be over.  And so his army, marched deep into the South and on to the sea, virtually untouched, while they burned and dismantled everything.  For the next one hundred years, the South would despise Sherman's name.

There was so much that Hanson covered in this second part and I'm sure he could have gone on and written an entire book on Sherman.  Again, I'm glad to have read more of Hanson's books, as I have learned more about a man, a war and our nation's history.
Posted by rockyrook at 7:28 PM