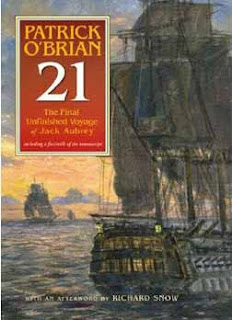 The Final Unfinished Voyage of Jack Aubrey was published 7 years ago in 2004.  It was published under the title of "21" in the United States.

The typewritten script, of course, was easy to read as they just printed that.  But there were several pages that were not typewritten; they were just hand-written.  I could read some of the words, but I could not get the gist of it.  So in this case, the wikipedia summary really helped.

It had the makings of another great POB book for sure.  But I somewhat like that the last fully published book was Blue at the Mizzen as it ends with Jack "on top" rather than on a low ebb.

There is no doubt POB could have kept on cranking these books out year after year.  But has his wikipedia entry states (along with the post script in 21) he was living quite a lonely life.  His wife had died in 1998.  He died two years later in 2000.

The Aubrey-Maturin Series
So it really is finished (for me).  I started reading Master and Commander in Yellowstone while on a family vacation back in the summer of 2010.  And now a year and a half years later I'm reflecting on what a great series it has been.

That bug, which I wrote about in my review of M&C, as diminished.  But the love of reading about these two amazing figures continued.  I actually became more enamoured with Maturin.  One is seemingly led to believe he is just a flimsy naturalist - a soft medicoe.  But he is a savage spy and duelist.  He is a cold reptilian to Napoleon allies, but a warm, kind soul to those he medically helps and to those who are his friends.

Jack - is a true sailor through and through.  His passion and drive for a blue flag is relentless and he wears his heart on his sleeve while around Stephen.  You can tell he loves his men and officers.  He is quick to save a life and slow to physical punishment.

It's a fantastic series.  I've not really found a negative critic of the series.  In fact, it is so highly regarded, at the bookstore or library, it is not placed under fiction or sea-fiction, but rather under Literature.  It belongs with Dickens and Austin - it is that good.

So if you're curious about the series, I heartily recommend jumping in with both feet.
Posted by rockyrook at 5:10 PM