Letters from a Stoic 79 - On the Rewards of Scientific Discovery

On the Rewards of Scientific Discovery

The first third of the letter is centered around Lucilius' trip in and around Sicily, along with the sights and land and sea marks in that area.  Lucilius writes about poem about Mt. Aetna, a topic of which many previous writers have tackled.  And due to the fact that so many have written about Mt. Aetna, Seneca observes:

It makes a great deal of difference whether you approach a subject that has been exhausted, or one where the ground has merely been broken; in the latter case, the topic grows day by day, and what is already discovered does not hinder new discoveries. Besides, he who writes last has the best of the bargain; he finds already at hand words which, when marshalled in a different way, show a new face. And he is not pilfering them, as if they belonged to someone else, when he uses them, for they are common property.

He's absolutely right.  On topics which have been discussed and written about for so many years and centuries, even millennia, it is quite difficult to add to the subject.  So much so, that many of these topics are now "common property."  I feel this way about philosophy.  And at this time in my life, I am embarking on a grand journey to delve a bit deeper to explore the many varying philosophies and aspects of philosophies (pursuing B.A. in philosophy).  And on a related topic of the principal of charity and debate, I read in this article, the quote: "First, we listen and only then do we respond."  I feel that I should hardly add anything to the grand debate because I have not fully listened!  And to tidy up this thought, I will simply say, that the reason I engage in discussion and writing about the topic of philosophy is because I wish to learn, and in discussion, inquiry and writing, I learn.

Seneca next pivots to the topic of wisdom and this concept of one either being a sage or a fool.  Either you have wisdom (i.e. you've reached the top of a summit) or you don't, but are progressing (you are still hiking to the summit).

Wisdom has this advantage, among others, – that no man can be outdone by another, except during the climb. But when you have arrived at the top, it is a draw; there is no room for further ascent, the game is over. Can the sun add to his size? Can the moon advance beyond her usual fulness? The seas do not increase in bulk. The universe keeps the same character, the same limits.

Then he makes an interesting observation about gifts.  Perhaps Nature has given us these unique gifts, but the path to wisdom is still open for all.

Men who have attained wisdom will therefore be equal and on the same footing. Each of them will possess his own peculiar gifts: one will be more affable, another more facile, another more ready of speech, a fourth more eloquent; but as regards the quality under discussion, – the element that produces happiness, – it is equal in them all.

Returning to the timeless and unmovable concept of virtue, Seneca notes:

virtue will not be brought down to a lower plane either by flames or by ruins. Hers is the only greatness that knows no lowering; there can be for her no further rising or sinking. Her stature, like that of the stars in the heavens, is fixed. Let us therefore strive to raise ourselves to this altitude.

We attain to virtue - we ascend her summit.  The outcome we seek is the summit.  But if you are distracted by competition with other hikers on the mountain, you are missing the point.  While you may be higher up (or lower) than others, that is not the goal.

goodness does not mean merely being better than the lowest. Who that could catch but a mere glimpse of the daylight would boast his powers of vision? One who sees the sun shining through a mist may be contented meanwhile that he has escaped darkness, but he does not yet enjoy the blessing of light.  Our souls will not have reason to rejoice in their lot until, freed from this darkness in which they grope, they have not merely glimpsed the brightness with feeble vision, but have absorbed the full light of day and have been restored to their place in the sky, – until, indeed, they have regained the place which they held at the allotment of their birth. The soul is summoned upward by its very origin. And it will reach that goal even before it is released from its prison below, as soon as it has cast off sin and, in purity and lightness, has leaped up into celestial realms of thought. 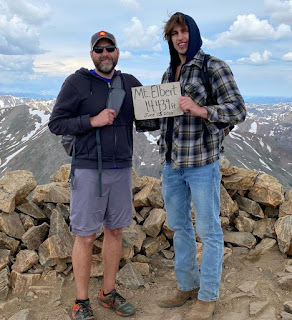 My son and I climbed Mt. Elbert in Colorado last year.  It was our first 14K foot mountain to climb.  Since we are just day-hikers, we chose the gentle giant - we didn't want any technical issues - but it is a notable mountain to climb as it is the highest peak in Colorado.  The views were spectacular and rewarding as we slowly made our way up it's side.  But having lived at sea-level for over 20 years, the climb up was difficult.  We stopped many times and with each stop, the views and sense of accomplishment became clearer.  Towards the top, as the incline became quite steep, we wondered if we ought to turn around.  But we pressed on, keeping an eye on any incoming storms.  Many others, on the trail, encouraged us to press on - that the view at the top was worth it.  We plodded on.  And when we did get to the top, the view was spectacular and the sense of accomplishment was thrilling.  We snapped some pictures and then raced back down to avoid an incoming storm.

At the bottom of the mountain, we felt victorious for having climbed it without incident or injury.  We gave each other a big hug in the parking lot - as a father - this would be my last hike with my son for a while as he would head off to the Marines two months later.

To tie this back to Seneca - while we ascended a bit up the mountain and while the views were excellent, we could not appreciate the full, unimpeded view from the summit.  We would never enjoy that full sense of achievement and accomplishment until the ascent was complete.  The ascent to wisdom is the same.  Many of us will only ever be prokoptons for the duration of our life and only enjoying limited views on this massive mountain.

The last third of Letter 79 deals with the fact that many people are blind to virtue and only see it many years later.  Seneca says, "Fame is the shadow of virtue."

When I first read that, my brain froze up a bit.  Fame is an indifferent; why should Seneca care about it as related to virtue.  But as I read that again as well as the rest of the letter, it became more evident that he was simply saying something synonymous with the idea of "truth will out!"  A similar idea I've heard others say is "history will be the judge of me."  This notion stems from the idea that many people today can't see that the decisions being made are indeed the right decisions.  Seneca references many historical figures, including Cato.  Perhaps the sentiment of the day was that many supported Ceasar, but history shows that Cato was right!

And how long did our state remain in ignorance of Cato! They rejected him, and did not know his worth until they had lost him ... how many there are whose progress toward virtue has come to light only after their death!

Later on, he takes a long-winded approach to saying that history is the ultimate judge of us all.  While we may be blind today, given sufficient time and retrospective thought, we will see the follies of our ways.

Virtue is never lost to view; and yet to have been lost to view is no loss. There will come a day which will reveal her, though hidden away or suppressed by the spite of her contemporaries. That man is born merely for a few, who thinks only of the people of his own generation. Many thousands of years and many thousands of peoples will come after you; it is to these that you should have regard. Malice may have imposed silence upon the mouths of all who were alive in your day; but there will come men who will judge you without prejudice and without favour.

I don't think he is saying that we should live to be famous in the history books.  But he's saying that given a sufficient amount of time, if the people of the future look back on your life, will they regard you as wise?  I guess it depends on the state of mind of those in the future!

Regardless, we should live according to Nature, who is virtuous.  We should look to the unmovable standard and align our life accordingly.  Be loyal to her alone.

Virtue has never failed to reward a man, both during his life and after his death, provided he has followed her loyally, provided he has not decked himself out or painted himself up, but has been always the same, whether he appeared before men's eyes after being announced, or suddenly and without preparation. Pretence accomplishes nothing. Few are deceived by a mask that is easily drawn over the face. Truth is the same in every part. Things which deceive us have no real substance. Lies are thin stuff; they are transparent, if you examine them with care.