Letters from a Stoic 41 - On the god within us

On the god within us

Like Socrates, the ancient Stoics believed in a daimon which acted as a guiding spirit for each person - each person has a unique daimon which guides them in life and in death.  Whether this is what Seneca is referring to in this letter or not, is not clear.  Stoic physics teach that there is pneuma in everything in the universe - that this is the creative fire which makes the Stoic god God.  So whether Seneca is referring specifically to one's daimon or whether he is simply referring to the fact that pneuma (god) dwells within us, the key idea remains the same: we owe our rationality and the ability to become good, to the cosmos which gave rise to us.

Therefore, no need to pray to a statue or in a temple to "attain sound understanding."  Rather, look within.

God is near you, he is with you, he is within you.  This is what I mean, Lucilius: a holy spirit indwells within us, one who marks our good and bad deeds, and is our guardian.

This next part of the letter seems a little controversial, at least to me.

Indeed, no man can be good without the help of God. Can one rise superior to fortune unless God helps him to rise?

What are we to think of this?  It seems that it could be construed a number of ways.  It could simply mean that we humans cannot be good if we did not exist and the cosmos / Nature / god gave rise to us, therefore we could never be good without god's help.  Or it could mean that despite our best efforts and whether we are conscious of god's help or not, no matter what we do, we could not become good without a daimon or perhaps our rationality, guiding us.  I think there is much we can do and learn on our own.  At the very least, we can have a grateful attitude for our existence.  On the other hand, we could seek to understand Nature and god and learn how our daimon can guide us to the best life that we could have.

In the next part of the letter, Seneca's reverence for Nature waxes poetic.  For people who love the outdoors, it is hard to not envision the beauty Seneca writes of.

If ever you have come upon a grove that is full of ancient trees which have grown to an unusual height, shutting out a view of the sky by a veil of pleached and intertwining branches, then the loftiness of the forest, the seclusion of the spot, and your marvel at the thick unbroken shade in the midst of the open spaces, will prove to you the presence of deity. Or if a cave, made by the deep crumbling of the rocks, holds up a mountain on its arch, a place not built with hands but hollowed out into such spaciousness by natural causes, your soul will be deeply moved by a certain intimation of the existence of God. We worship the sources of mighty rivers; we erect altars at places where great streams burst suddenly from hidden sources; we adore springs of hot water as divine, and consecrate certain pools because of their dark waters or their immeasurable depth. 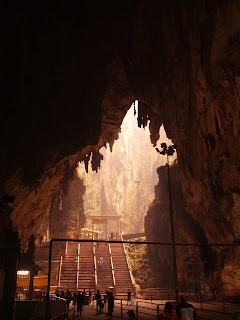 As I read the above passage, I can't help but think of the times I've spent hiking Mt. Elbert or Mt. Timpanogos with my son, or walking my dog in the cool autumn forest near my home, or seeing deer graze along the path.  Regarding the cave - I know this hallowedness of which he speaks, as do countless others.  Having visited many caves in both North and Central America as well as Malaysia, there is an awe when one enters such a massive, natural structure.  Simply looking into the dark sky with no city lights around, will cause you to lose your breath beneath the vastness of space.

Seneca also stands of awe of people who have exercised tremendous virtue, to which (again) he ascribes to god.  The things to note in the following passage are the qualities of character found in such a person.  These are the same a good person should emulate.

When a soul rises superior to other souls, when it is under control, when it passes through every experience as if it were of small account, when it smiles at our fears and at our prayers, it is stirred by a force from heaven.

Such a person, according to Seneca, comes from god, like rays come from the sun.

Just as the rays of the sun do indeed touch the earth, but still abide at the source from which they are sent; even so the great and hallowed soul, which has come down in order that we may have a nearer knowledge of divinity, does indeed associate with us, but still cleaves to its origin.

Where can the good be found?  From within you and me.  Your good comes from your soul.  Mine stems from my soul.  This is the only thing over which we have control.  All else is not under our control.  The only way to become good is entirely within our control, regardless of whatever happens.

A golden bit does not make a better horse. The lion with gilded mane, in process of being trained and forced by weariness to endure the decoration, is sent into the arena in quite a different way from the wild lion whose spirit is unbroken; the latter, indeed, bold in his attack, as nature wished him to be, impressive because of his wild appearance, – and it is his glory that none can look upon him without fear, – is favoured in preference to the other lion, that languid and gilded brute.

What makes a human good?  Arete.  The ability to exercise the right virtues for the right reasons at the right time.

Praise the quality in him which cannot be given or snatched away, that which is the peculiar property of the man. Do you ask what this is? It is soul, and reason brought to perfection in the soul. For man is a reasoning animal. Therefore, man's highest good is attained, if he has fulfilled the good for which nature designed him at birth.

And he ought to be especially praised when the majority claim that the good is found in riches, health, fame and other perishables.

to live in accordance with his own nature. But this is turned into a hard task by the general madness of mankind; we push one another into vice. And how can a man be recalled to salvation, when he has none to restrain him, and all mankind to urge him on?