Memento Mori (Memento Vivere) and Why I Should Give a Damn

This blog remained quiet all through the months of September and October, for various reasons.

Firstly: I spent time reading Pierre Hadot's Philosophy as a Way of Life, and I have been digesting it.  I'm reading it a second time now and will post several reviews and commentaries on it through this month.

Secondly: My practice of memento mori has sunken really deeply lately, so much so, that one of the conversations I had with my dear wife a few weeks ago, centered around the question: why did my parents decide to have me?  My father was 49 years old and my mother almost 40 when I was born?  What drove them to have a seventh child?  I don't have an answer yet, but I think I'm closer to it now.

Additionally, as I have pondered my death, I have seriously realized the futility of all the human efforts.  "What is the point?!" I shout out to the vastness of space towards the stars.  As Marcus, so often reminded himself, emperors, kings, conquerors, after having left a meager mark on the earth, have passed on to become dust and then are not even remembered after a few generations ... or sooner (see Meditations 8.21 as an example).  So what is the point of it all, if in the end, the world and everyone in it, will be sucked into a super-massive black hole?  After it has all been said and done, will there simply be silence, and no one there to not hear it?  I think, perhaps.  Or maybe we just do it all over again.

Does that scare you?  Depress you?  Or maybe it emboldens you?

My daily routine involves reviewing the day's events; making notes of improvement and actions done well and virtues displayed (or not).  A few weeks ago, I found myself writing the word "again" repeatedly.  The word "rut" comes to mind.  Days and weeks were beginning to feel like Groundhog's Day.  It didn't feel like I was accomplishing much, when in fact, I was.  Also, during this time, I noticed again, that people weren't really listening to me.  It was like I was a no-body; people might acknowledge me when I shared my opinion or views, but no one actually heeded my advice.  And so this thought of "what's the point?  what value am I adding?" grew stronger.  I began to question what real value I bring to this life.  If I'm ignored while I live, and I'll be long forgotten when I die, then my life really is like a tree that grows, dies and falls in the forest and no one hears it or sees it.

I kept returning to Sisyphus.  For being so clever and to have outwitted many gods, he was condemned, by Zeus, to roll a boulder up a mountain, only to have it roll over the top of the mountain and back down.  And the condemnation also included him having to perform this chore every day, all day, for eternity.  How absurd!  How unproductive!  Nothing he did, in rolling this stone, accomplished anything.  The one thing he could possibly accomplish (rolling it up the hill and having it stay there), was not even possible.  My life, often feels like Sisyphus'.

A few weeks ago, I picked up Pierre Hadot's Philosophy as a Way of Life, as I have mentioned previously.  In the first few chapters, he quoted Georges Friedmann twice.


Take flight every day!  At least for a moment, which may be brief, as long as it is intense.  A "spiritual exercise" every day - either alone, or in the company of someone who also wishes to better himself.  Spiritual exercises.  Step out of ... duration ... try to get rid of your own passions, vanities, and the itch for talk about your own name, which sometimes burns you like a chronic disease.  Avoid backbiting.  Get rid of pity and hatred.  Love all free human beings.  Become eternal by transcending yourself.

This work on yourself is necessary; this ambition justified.  Lots of people let themselves be wholly absorbed by militant politics and the preparation for social revolution.  Rare, much more rare, are they who, in order to prepare for the revolution, are willing to make themselves worthy of it.

The words, "become eternal by transcending yourself" sunk deep into my soul.


Another passage, which I have often read and re-read via Hadot, is by Friedrich Nietzsche and deals with the concept of satisfaction and happiness:


The main question is not at all whether or not we are satisfied with ourselves, but whether, more generally, there is anything at all with which we are satisfied.  Let us suppose we said Yes to one single instant: we have thereby said Yes not only to ourselves, but to the whole of existence.  For nothing is sufficient unto itself - neither in ourselves, nor among things - and if, just one single time, our soul has vibrated and resonated with happiness, like a stretched cord, then it has taken all of eternity to bring about that single event.  And, at that unique instant of our Yes, all eternity was accepted, saved, justified and affirmed. (The Inner Citadel, p. 144)

Now, to go back to the idea of Sisyphus.  Albert Camus took the story of Sisyphus, turned it on its side and told people, like me, to take a look.  In The Myth of Sisyphus, he said:


I leave Sisyphus at the foot of the mountain. One always finds one’s burden again. But Sisyphus teaches the higher fidelity that negates the gods and raises rocks. He too concludes that all is well. This universe henceforth without a master seems to him neither sterile nor futile. Each atom of that stone, each mineral flake of that night-filled mountain, in itself, forms a world. The struggle itself toward the heights is enough to fill a man’s heart. One must imagine Sisyphus happy.

And so Hadot, Friedmann, Nietzsche, Sisyphus and Camus, grabbed me by the shirt-collar and slapped me across the face!  If for one single moment, you can say you were pleased or happy or satisfied, even in the daily grind, then your life and the universe and the world and eternity, would have been worth it.  And if you can grab it once, then why not try to grasp at it again?  Why not perform a "spiritual exercise" and transcend yourself every day?  Why not aspire to the "higher fidelity" of life?  What if, for an instantaneously brief moment, that rock paused at the pinnacle, and Sisyphus simultaneously gazed across the universe and was able to grasp and comprehend the totality of God's creation (not unlike the Overview Effect)?

The ancient Stoics, while not astronauts, still aspired to achieve this view from above in their quest to become sages.  And while modern man has left the Earth's atmosphere and traveled our solar system, this spiritual exercise, for the post-modern human, is still worthy of practicing here on Earth - in a forest, or by a lake.  In a sense, it is not a memento mori practice, but rather a memento vivere practice! 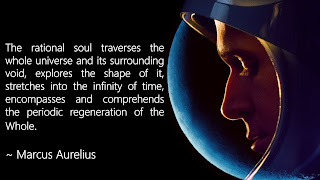 Post-script quotes I found after this post was published.


I often entertained the impulse of ending my life then and there; but the thought of my kind old father kept me back. For I reflected, not how bravely I had the power to die, but how little power he had to bear bravely the loss of me. And so I commanded myself to live. For sometimes it is an act of bravery even to live.

I have just completed They Myth of Sisyphus by Albert Camus and I've just re-read this post and realized that Camus rejected 'the leap' which I had Sisyphus perform - the leap to faith and God.  So I guess that answers the question which category I fall under in Camus' mind!

I will also say, I understand, now, Camus' point that one must imagine Sisyphus happy.  It was just lost on me, when I read that passage, that one must imagine Sisyphus rejecting the leap to faith (i.e. rejecting illusion & delusion) and embracing fully and lucidly that the universe is absurd and remain happy.  It's almost as if he defiantly stands firm, shakes his fists to ... I guess nothing ... and carries on with himself as his own audience.  I think I comprehend that, but don't think it fits with my own delusion.  What I'm most appreciative of is someone, besides me, sees how absurd the world and universe are.

I have felt the vibration of my life; I've felt the goodness and timelessness of virtue and my directing mind chooses to strive for it, even if it is brief in duration and sparse in repetition.

What rings truer (than Camus) to me is this passage from Marcus Aurelius:

"The Whole is either a god - then all is well: or if purposeless - some sort of random arrangement of atoms or molecules - you should not be without purpose yourself." (Book 9.28)

If there can be some semblance of order and purpose and I can find it within myself, then I should choose that path.
Posted by rockyrook at 5:00 AM