Epictetus Discourses 4.7 - On freedom from fear

Of freedom from fear
My journey into Stoicism began over a decade ago.  After graduating high school, and after living in a foreign country for two years serving a church mission and after graduating from college and getting married and starting a family and working full time, I began to feel like something wasn't right.  I suffered from bouts of depression - especially on the weekends.  Between 2007 and 2014, the bouts got worse and worse, until my reasoning got to the point where I thought ending my life was more bearable than continuing to live.  Those were dark days.  It was like looking over a vast chasm that was pitch black and contemplating jumping into it.  There was real fear in my soul.

Instead of jumping, I reached out for help.  First to my wife, then to some others and eventually to a trusted therapist.  My therapist was able to help me correct some faulty internal thinking using Cognitive Behavioral Therapy.  After I learned what CBT is, I then learned that it had strong similarities with Stoicism.  From there, I learned of Donald Robertson, Ryan Holiday, then Marcus Aurelius, Seneca and Epictetus.  The dark days, as I call them, have never returned and I doubt they ever will.  I can return to that vast, dark chasm and look down, but now I experience no fear whatsoever.  This is the freedom Stoicism offers.

Epictetus talks of a similar situation - that of staring at death in the form of a tyrant.


if someone who has no particular desire either to die or to live, but is happy to accept whatever is granted, comes into the presence of the tyrant, what is to prevent him from approaching him without fear? - 'Nothing.' - If someone feels the same, then, about his property, and his children, as that man feels about his body, and in short, he has been brought into such a state by some madness or despair that he doesn't care whether he has them or not, but as children playing with bits of pottery (dice) compete with one another in the game without caring about the bits of pottery, so he too has come to set no value on material things, but merely takes pleasure in the game and its moves, what tyrant could still inspire him with fear, or what guards, or what swords of theirs? (v 4-5, p. 254)

If someone who is mad (crazy) or someone who is in despair can achieve this state of mind, then surely "reason and demonstration [can] teach people that God has made all that is in the universe, and the universe itself as a whole, to be free from hindrance, and self-sufficient, and has made all the parts of it to serve the needs of the whole?" (v. 6, p. 254)  When that person has come to an understanding of this logic, there is nothing that can prevent them "from living with a light heart and easy mind, calmly awaiting whatever may happen, and putting up with what has already happened." (v. 12, p. 255).  That is the true Stoic mental state.

There is an old movie, based on an old book, which has an interesting scene in it.  It is from A River Runs Through It and it is about how the young Maclean is learning how to write well.  His father makes him write the same paper over and over again until it has been written well.  Once he accomplishes it, his father tells him to throw it away!  If you are like me, you might gasp a bit about all that work, only to be crumpled and tossed into the trash.  But, the ends have been achieved!  The young Norman Maclean learned what his father wanted him to learn.  The goal was not to write a perfect paper to be framed and published.  The goal was to have gone through the learning.  You can see this scene here: https://www.youtube.com/watch?v=gA-sEfXOaEQ

Similarly, we must approach life and even our life itself.  The goal is not to hold onto wealth, health, possessions, fame, wife, children.  The goal is to go through the experience and to exercise what is truly yours: your use of judgement, impressions and virtues. 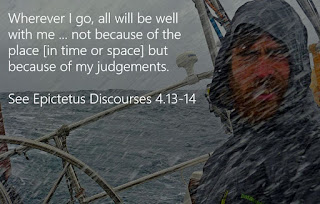 Your judgements are: you hold wealth, possessions, fame, health, relationships as externals and indifferents.  These things are the clay of life and inherently have no value.  The value is in what you do with the clay - what your unique judgement and virtue demonstrates.  "Let others be afraid [of losing or gaining] such things!  For my part I've enquired into them, and no one holds any power over me.  I've been set free by God, I know his commands, no one has the power any longer to enslave me, I have the right emancipator, I have the right judges." (v. 16-17, p. 256)

As for the tyrant, "I have no fear" of him or the way he can treat me.  "Why should I admire him any longer, why should I be in awe of him, why should I be afraid of his guards?  Why should I rejoice if he speaks kindly to me and offers me a welcome, and why should I tell others how he spoke to me?  Is he Socrates, by any chance, or Diogenes, that his praise should provide proof of what I am?" (v. 28-29, p. 257)

Don't be like those people whose concern is for living in "marble halls" or having hundred of people working for them ("slaves") or who are concerned about wearing "eye-catching clothes" or having many possessions, listening to the latest music, seeing the newest movies or getting the newest tech (see v. 37, p. 258).  As long as they "devote [their] concern to external things, [they'll] own more of those than anyone else" but their "ruling part" of them will be "filthy and neglected." (v. 41, p. 259)

But rather, be like a child, whose goal is to play the dice game.  They want to roll the dice and enjoy the game.  They value the game more than owning the dice!
Posted by rockyrook at 5:00 AM