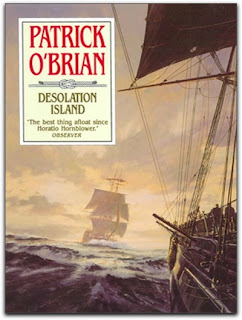 Desolation Island was a very good read.  The actual island Captain Aubrey landed on after being shipwrecked is now called today the Kerguelen Islands.  I also need to start including links to Tom Horn's site in these posts.  Here is his mapping of Desolation Island.  It's a very useful site for tracking voyages.

The book started off a bit slow, but then began picking up as the Dutch ship began tracking them.  The usual battle ensued and Lucky Jack survived another injury that should have killed him.

After they hit an iceberg and damaged the ship, they wobbled along eastward hoping to land on some island.  Jack had a number of plans running in his head ... all different sorts of variables needed accounting.  It was at this point that I read the following passage:

These and many more were decisions that only he could take.  Collective wisdom might do better, but a ship could not be a parliament: there was no time for debate.  The situation was changing fast, as it often did before an action, when a whole carefully worked-out plan might have to be discarded in a moment, and new steps decided upon.  This rested on him alone, and rarely had he felt more lonely, nor more fallible, as he saw the headland advancing towards him, and with it the moment of decision.  The lack of sleep, the pain, the confusion of day and night for weeks on end, had told upon him; his head was thick and stupid; yet a mistake in the next hour might cost the ship her life.

Does that passage not describe a captain's life perfectly?  I really enjoyed that paragraph.

Then a bit later on in the book after they had landed, Jack confided this in Stephen:

It is a great relief to whine a litte, rather than play the perpetual encouraging know-all, so I lay it on a trifle thick: don't take me too seriously, Stephen."

This sentence reveals a bit more of the burden a captain must bear.  He cannot afford the luxury of not knowing or of showing any despair.  Ever the optimist and commander he must be.

I am taking a quick break from Patrick O'Brian.  With Desolation Island being part the of the War of 1812 arc, turning to this next book will be quite informative.  Desolation Island introduced a number of Americans as well as a few of their ships.  The book I began reading today is Six Frigates by Ian Toll.  It is about the founding of the United States Navy.  I have only ready 13 pages of the book and I have already had a few "tingles" ... I know it will be an amazing book!
Posted by rockyrook at 4:42 PM