We left Saturday at 8:30am.  Emma took us to the airport super-early, because we were hearing some news reports about one airport terminal being closed from the partial government shut-down.  But our worries were not warranted.  We flew through check-in and security in 23 minutes.  Our reward was to sip a warm beverage while waiting for our flight.  We were able to talk quite a bit and I was able to catch up on some Chess Tempo chess problems.  Jill talked to her Mom while we waited and they had a great conversation.

The first leg of the trip was to Los Angeles.  I am just getting over a cold, that has been lingering for a couple of weeks.  It is in my sinuses.  So ascending and descending on the airplane was quite the experience.  I think ascending was easier, while descending made it a bit tough to pop my ears.  Jill had the window seat; I sat in the middle and we had a larger man sitting next to me in the aisle.  I later came to learn he is a comedian who flies all over the world entertaining guests on cruise ships and such places.  We started talking, but I soon realized he was talking and I was listening.  So I went back to my book.

We landed in LA nicely and had a two-hour layover.  We ate salmon and chicken sandwiches at Wolfgang Puck's, then did some shopping as Jill was going to finish her first book and needed a second.  I too found I needed a more entertaining book than the one I had (business book).

The flight to Kahului was close to six hours and it felt much longer.  The turbulence was pretty rough at times.  Jill was reading a book about a man and a woman who are sailing and are caught in a hurricane.  The man dies and the woman survivies 39 days at sea.  So she was wondering if something similar was going to happen to us if the airplane broke up over the ocean!  The Friday before we left, I was watching Castaway for a few minutes!  But the plane survived and we survived.  We were just really tired by the time we landed.  Luckily our luggage was one of the first at baggage claim.  The car rental line wasn't too bad either, but then we had another hour of driving to get to the place.

The place was nice enough; just AC in the bedroom.  But we didn't travel 10 hours for the room.  We got some sleep. 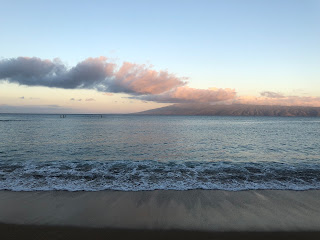 After sleeping in a bit, we woke and got our walking clothes on and walked 3 miles to the Gazebo.  On the way, we stopped at a few beaches and took some pictures.  When we got there, there was a line as expected.  But we didn't feel the least desire to wait in it.  So we pulled up our Google maps app and looked for another high-star place to eat breakfast.  We found The Coffee Store in Napili.  The brews were delicious and the pastries divine.  Then we walked back to our place and collected our stuff and headed to the beach.

The beach by our place is divided by a rock cropping.  There is a very small beach area, with rocks on both sides, to the north.  And to the south is a much larger beach, with rocks also on both sides.  We headed to the smaller beach first and had it to ourselves.  We spent about 40 minutes just watching these 3 turtles swim around and eat.  It was amazing.  Then we sat in the sand and talked and let the ocean waves lick our feet and legs. 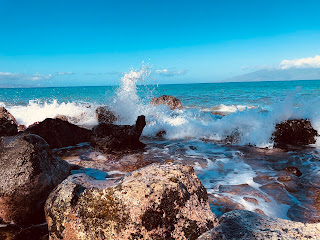 We then decided to check out the larger beach and try some snorkeling.  We expected the other beach to be much busier, but there were only maybe 20 or so people on it.  We put our chairs in the shade of a large tree next to the rocks and then got our gear on and went for a swim.  There wasn't a plethora of fish, but we did see quite a few colorful fishes.

After the swim, we just soaked in the sun and the beach.  It was lovely.

When we had our fill, we walked back to the place (a one minute-walk), to the pool to shower and swim around a bit to get the salt water off.  Then we came back to the place and watched the football games.  We caught the end of the Rams v Saints game and then watched the Patriots v Chiefs game.  I'm glad the Rams won, but was disappointed the Chiefs lost.

At precisely 4pm local time, I logged into recreation.gov to reserve our park pass to see the sunrise on Haleakala.  They release 80 tickets two days in advance, at 4pm.  We wanted to do this, so made sure we were ready to claim a pass at 4pm.  We've been hearing these get gobbled up very quickly.  The rest of the tickets have to be bought 2 months in advance. 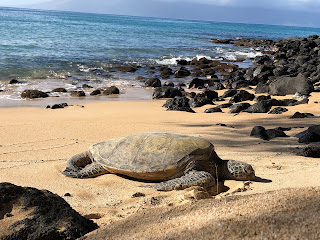 During the football games, we walked back to the beach and sat in the shade.  We found a huge turtle had arrived and was chilling on the beach.  It was pretty cool to see one so close.

After the football games, we drove to Lahaina and ate dinner at Paia Fishmarket Front Street.  We had vowed we would eat fish every day.  I had the Mahi Mahi blackened and Jill had it in tacos.  Oh my!  It was delicious!  We sat next to a couple from Colorado, who had been on Maui all week, and they said it was the best food they'd had!  So we scored big on our first dinner.  The cole slaw was really good, along with the house fries.

Then we walked around Lahaina, doing some light shopping as well as observing the lunar eclipse.  It was quite the sight!  After that, we drove to Safeway to pick up some groceries, and to get a stronger 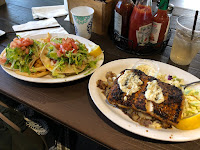 decongestant for me.  Jill had called the doctor-over-the-phone earlier and got me a prescription to hopefully knock this thing out.  I feel good ... maybe 85%, so I'm not suffering, but just not 100%.  Thankfully, I can smell and taste still.

After shopping, we came home, ate some ice cream, watched a bit of Indiana Jones and the Temple of Doom before falling asleep.  It was a great first day.
Posted by rockyrook at 10:00 PM