We slept in on Monday and then went on a nice walk to the local village, where they had a great fruit stand and lots of places to sit and eat.  We found a place called Java Jazz that served some wonderful coffee and an pretty delicious pancake and omelette.  The place was wildly decorated and even had someone playing jazz in the morning.  I would have expected it to only have live jazz later in the day.

After breakfast, we walked around the shops a bit, got some sunglasses, t-shirts and food at the market place.  Then we walked back to the place, packed some food and gear and drove north.  The last time we were in Maui, we only drove to see the Nakalele Blowhole, but from a distance.  This time, we wanted to go a bit further.  We ended up, my mistake, driving past the Olivine Pools, to a point where the road was extremely narrow and would barely fit one car.  There were two times we had to back up to a wide-enough spot, to let the oncoming traffic through.  We only drove a mile down this road before we decided to turn around.  Thankfully, going back we didn't have to back-up to let oncoming traffic pass.

We found the Olivine Pools and hiked down.  It was a good 10 minute hike to get to the bottom.  About halfway down, there is a marker with a warning pleading people to not go past.  It tells of a family's son who was swimming in the pools on January 23, 2017, when a wave hit him and swept him out to sea; they never recovered his body.  So naturally, we ignored it and hiked past.  There were about 20 people in the area.  There were several pools, but the main one was gorgeous.  It was like jumping into Jacob's Well.  But instead of that fresh feeling, it was a bit salty!  The rocks around the pools were constantly being pounded by the waves.  The view was breathtaking! 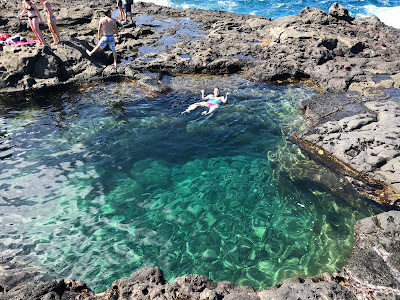 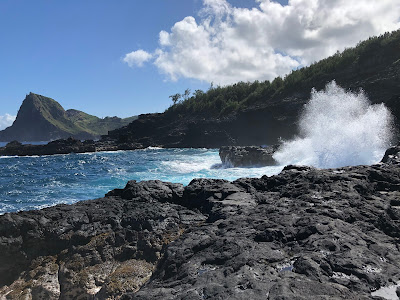 When we had our fill, we hiked back up and drove on to Nakalele Blowhole.  Similar to Olivine Pools, you had to walk down to get the the cool stuff.  It was also about a 10 minute hike.  There were lots of rocks - like we were in a big rock bowl.  There were no warning signs near the blow hole, so maybe no one has died near there.  I think there was one sign that said to stay on dry rock.  The blow hole is like Old Faithful; water comes spouting up and into the air.  The really cool think about the Nakalele hole is the sound.  As waves crash onto the rocks, you can hear the rushing air and feel the force of the water rushing up through the hole.  The fun part is trying to get a picture or selfie at the right time.  I was able to get some video of it spouting a few times; and Jill and I were able to get a pretty cool selfie at the right time!  This was our highlight of the day - we sat around for quite some time, watching the waves pound the rocks. 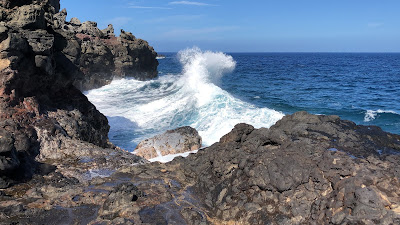 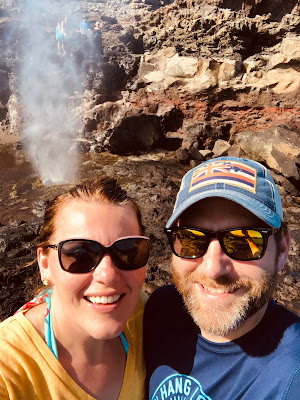 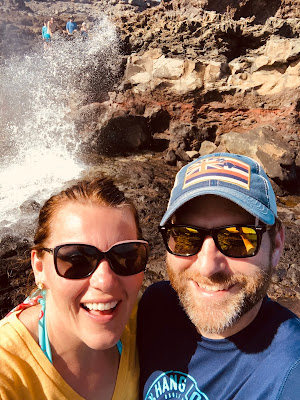 After the blow hole, we drove back to the place to snorkel some more and sit on the beach.  We waited and watched the sun set.  A man got his bag pipes out and played a couple of songs and everyone on the beach clapped.  Then we went to a burger place called Maui Brewing.  Unfortunately, my sinuses were really bad and I couldn't taste anything.  Jill said it was really good food.  She ordered some salad and I had some fish burger.  I imagine it tasted great. 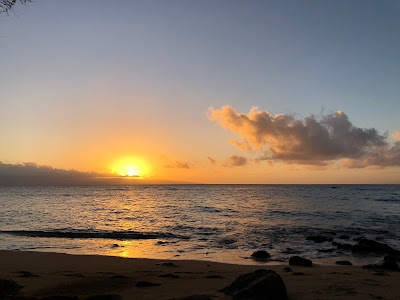