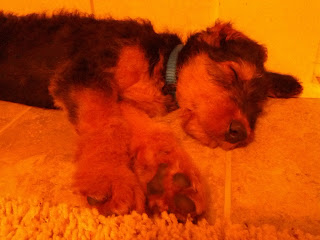 our friends came over tonight.  they brought their new puppy - cooper.

cooper and our friends' other dog - missy - played with our dog - fritz.

after about an hour of playing around, cooper found a nice cool spot on the tile, nudged his nose in the corner and fell asleep. 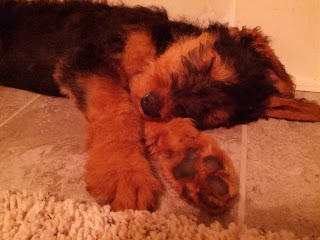 cooper is an airedale.  when our dog fritz moves on to the next life, we're thinking of getting an airedale.
Posted by rockyrook at 10:05 PM No comments: 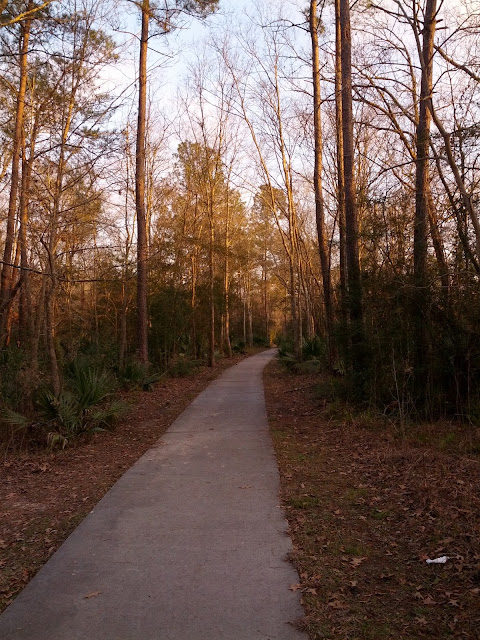 Posted by rockyrook at 5:49 AM No comments: 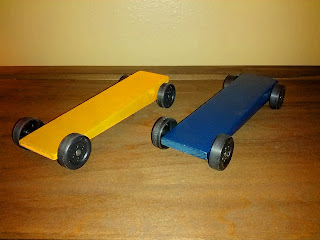 Shangri-La Diet in a Nutshell

Reading Seth's blog post (link here) led me to this forum (link here) where on this page of that forum I found the following two summaries of the SLD:

The theory seems to be that the body finds 2-300 excess calories and can't figure out where they came from, so shuts down your hunger and resets weight setpoint over time. Kind of like your body thinks you went from eating slim pickin's in winter to having plentiful food in summer...it just knows you are getting more energy from the food you are currently eating so it can up the metabolism and lower the weight setpoint since it figures you found a good supply of chow and wants you to keep eating without getting fat.

The idea is that flavourless calories do NOT give the message of abundance, as they would in nature. So the body reduces the weight setpoint as a survival mechanism in hard times. Once your body weight is sitting above your setpoint, you naturally are not hungry, you eat less and your body loses weight to the setpoint. If your actual bodyweight is sitting below your setpoint, you are excessively hungry and eat until you regain to where your body wants to be. A protective mechanism.

How many times have we lost 5 or so lbs below where we usually sit, through a major struggle of restraint and intake reduction, then blow it all in a fit of uncontrolled appetite and eating and regain the weight? I know that 148-152 lbs is a huge sticking point for me and the first time I started SLD, I slid right past that point, going from 150-146 in a few days and then remaining with the lowered appetite for months, as I lost to my goal of 133-135 lbs. Took only 3 months. It was rather amazing.

Seth Roberts took the theory of the impact of flavourless calories on setpoint and bent it in various ways to try and "trick the brain" into lowering the setpoint. He tried things like flavour without calories, calories without flavour, using a flavour that is sometimes taken calorie free, then combined with calories at other times of the day. "Platinum Calories" as devised by one of the forum readers is a twist on the theory. It is based on the idea that fat calories provided alone will provide calories without triggering any insulin response at all - not such a strange concept around here. They are tasty (coconut oil in coffee, "oilmilk" - oil and water blended with lethicin, as examples), but I never found them as effective as the flavourless calories. Bulletproof coffee is the same concept - lots of fat without any other dietary calorie sources, and hence satiety that lasts for hours.

I want to try this one more time using Spectrum's refined coconut oil.  I think I saw a jar of this at the local Kroger, selling for about $7 or $8.
Posted by rockyrook at 11:00 AM No comments:

so after that post, on tuesday i went out and lifted weights ... nothing aggressive ... just some bench pressing, bicep curls, etc.  i was fine all day long until the end of the day.  the pain in my left neck/shoulder area was extreme.  i assume it was a pinched nerve.  i could hardly turn my neck and at night, i was in extreme discomfort.  it took about a week for the pain to subside.

this sort of thing regularly occurs when i lift weights.  i'm just not sure i want go through this again for the 100th time.  i may just focus on simple push-ups and sit-ups along with long walks and spinning.
Posted by rockyrook at 1:54 PM No comments:

this would be my perfect week:
- i followed my planned workout routine; weights mon, wed and friday morning with 30 mins of spinning tues, thurs and saturday.
- i ate minimally every day, eating when i need to and not ever out of boredom.
- playing two chess games during the week and annotating them
- 20 tactics every day

if i could accomplish those goals in a week, i would be pleased.
Posted by rockyrook at 11:35 PM No comments:

day 2 of getting in the groove

today was ok.  i felt horrible in the morning ... headache, grumpy, head in the fog.  so i drank some caffeine via crystal light, and then i took some migraine meds.  i waited a couple of hours and then i ate 4 jimmy dean patties.  finally by 3pm, i was feeling good.

dinner was at 530pm, which was scalloped potatoes, meatloaf and veggies.  after dinner i ate 3 tart cookies.

as expected, the after-dinner itch came around.  i drank a full bottle of water, and then waited an hour before drinking some hot blueberry/vanilla tea with some agave  in it.  that seemed to do the trick ... its 11pm as i write this and no cravings or itches.

i now begin an extended fast that began at 6pm and will go all through friday and will end saturday morning at breakfast.
Posted by rockyrook at 11:01 PM No comments:

so i did pretty well yesterday.  my goal was to not eat until 6pm.  i drank lots ... water, tea, crystal light.  i went on a walk early in the morning for 30 minutes and then on another walk in the afternoon for 30 minutes.  when i got back from the walk at about 4:45pm, i was really sleepy-tired.  by 5pm, i was in one of those dazed-in-a-trance states and i just sat on the couch.

a little after 5pm, i got off the couch, went into the kitchen and ate some chips and cheese dip.  then i ate dinner with the family at 6:30pm - we ate this ham-green olive-swiss cheese salad and some breadsticks and cheese hotdogs.  i had mostly salad with 3 small breadsticks and one hot-dog.  i then ate some almond roca candy.  i was satisfied and it was just before 7pm.

then about 90 minutes passes and all during that time, i'm feeling fine.  but right at 8:30pm, after the kids and i have been watching lotr:fotr, i get this itch.  there is no better way to describe it.  it's an itch to eat something. now, i would normally drink a lot of water or tea, but at 8:30pm at night, i really worry about having to pee at 1am in the middle of my sleep.  i've got to do something about at 8:30pm itch.

some potential solutions:
- drink tea; but maybe not in such a big cup ... and drink it while playing chess or doing tactics
- listen to music

the bottom line is i've got to just eat a simple dinner and then be done until 6pm the next day.

i'll see how tonight goes.  i think i'm going to try the smaller portion of hot tea if i get that itch.
Posted by rockyrook at 7:58 AM No comments: 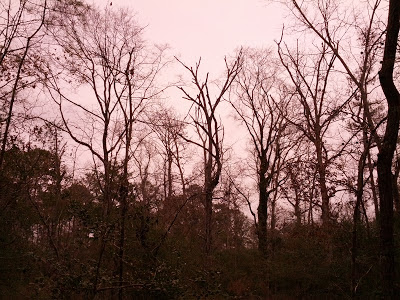 Posted by rockyrook at 9:00 PM No comments: