Key Concepts, Ideas and Quotes on the Discipline of Assent

a Greek word that represents the idea of a person's ruling center, commanding faculty, and rational faculty.

another definition is:  'commanding faculty' of the soul; the centre of consciousness, the seat of all mental states (source).

Pierre Hadot mentions "hēgemonikon" nineteen times in his book The Inner Citadel.  Here are a few of the relevant passages:

"[the hegemonikon] alone is free, because it alone can give or refuse its assent to that inner discourse which enunciates what the object is which is represented by a given phantasia. This borderline which objects cannot cross, this inviolable stronghold of freedom, is the limit of what I shall refer to as the "inner citadel." Things cannot penetrate into this citadel: that is, they cannot produce the discourse which we develop about things, or the interpretation which we give of the world and its events. As Marcus says, the things outside of us "stay still"; they "do not come to us"; rather, in a way, "it is we who go toward them" (XI, II)." (p. 106-107).

In this prior passage, we note that Hadot is calling the hegemonikon the inner citadel.  This is the center of our mental universe, which dictates our reality.  Therefore, it is crucially important that we see things as they really are!

The first practice you ought to master in the Discipline of Assent is circumscribing or drawing a boundary between your hegemonikon - which is in your control - and things outside your control.  This is how you practice "the dichotomy of control."  Hadot writes of four circles, while Epictetus lists out examples.  Regardless of how you frame it, the constant practice of categorizing things in your control vs. out of your control, is crucial.

Hadot's for "circles" or boundaries are:

the future or past
You simply cannot change past events; you cannot re-live the past and change what you have done.  Similarly, you do not know what will happen in the future, and therefore cannot control it 100% of the time.  Indeed, you can plan, but you cannot know exactly what will happen.  Ultimately, the only time span over which you have some modicum of control is the present.

involuntary emotions
Our bodies are subject to instinctive reactions which we cannot control.  The fight or flight reaction many experience cannot be controlled completely 100% of the time.  Some may train to control these powerful, instinctive reactions, but they are largely out of our control.  The key point, though, is to not let those emotions linger.  The more practice we put into to questioning our instinctive and reactive emotions, the better we become at controlling our emotions.  I'll discuss more of this further below (impression→assent→impulse).

Destiny / Universal events
The complexity of events in both the world and the Universe are out of our control.  We cannot control asteroids, solar flares and cosmic events.  We are subject to hurricanes, tornadoes, earthquakes, volcanoes, floods, winds, rain, fog, cold and heat.  We don't have any real control over wars, elections, political scandals and culture.  We are living in a river, as it were, and we don't control where it goes or how it flows.

Besides, Hadot's four circles, Epictetus lists things in our control and out of our control in his first chapter of the Encheiridion.

I think both Hadot's circle and Epictetus' list serve as a good framework for thinking about the dichotomy of control, but the hard work will come down to you as an individual.  Many things aren't so black and white.  Sometimes, something might be 60% in your control and 40% out of your control, and you have to act accordingly - knowing that there are certain things you can do, but knowing full well a set of variables exist that might disrupt the desired outcome.  This idea is called the "reserve clause."  Implementing "reserve clause" thinking, is another practice of the Discipline of Assent as well as the Discipline of Action.  Donald Robertson has a good write up about this: Action with a “Reserve Clause” in Marcus Aurelius.

impression→assent→impulse (to act or react)

Really take some time to think about the order of operations above.  Many of us have been trained to immediately jump to impulse after some impression hits us.  In a sense, we have let the our monkey or reptilian brains do the thinking, instead of letting the rational, reasoned side or our brains do the thinking.

Case in point: Your child haphazardly spills milk all over the counter top, and almost instantaneously, you begin to berate and yell at the child for being so clumsy!  In this case, you have let the emotion of anger take over your state of mind.  You have automatically judged the milk being spilled by your child as "bad" and have proceeded to let this judgement turn into an emotion, which then turned into a reaction, which formed into words coming from your brain, out of your mouth and into the ears and brain of your child.  You eventually come to your senses and you may apologize to your child for over-reacting.

You now get a do-over.  What do you do differently?  Would you like a longer pause between impression and reaction?

A quote, largely attributed to Viktor Frankl (but unsubstantiated) says: "Between stimulus and response there is a space.  In that space is our power to choose our response.  In our response lies our growth and our freedom."

What we need to do, is to "mind that gap" and practice growing it.  I like to think of this as the Stoic Pause.  The more technical term for it is Prosoche. 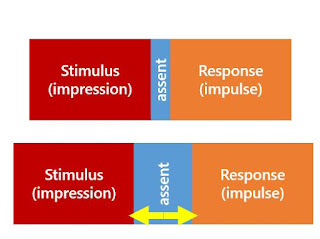 There is lots of information, as well as overlap in other philosophies and religion, on the topic of prosoche or mindfulness.  To put it succinctly, this exercise is all about becoming constantly mindful of your impressions, desires and actions.  We are bombarded with stimuli and events and people all day long.  Getting a handle - a very good handle - on your judgement of those things is crucial to becoming a true Stoic.  It is the practice of being aware of Hadot's "circles" and Epictetus' list and ensuring you have a true understanding of things, so you can assent and then re-act and act appropriately.

There has been plenty written on this topic.  I will link to a few articles that I have found helpful:

Prosoche: Illuminating the Path of the Prokopton

The Philosophy of Stoic Mindfulness by Patrick Ussher

How you practice mindfulness is up to you.  Journaling, writing, planning and reviewing your day, breathing, counting to ten before saying something, and meditating are all useful practices for becoming more mindful.  The more you are mindful of your circumstances and your emotions and attitude, the more you will be able to "slow things down" a bit - to give yourself time to decide whether you agree with an impression or not.

Epictetus best sums it up: Whenever the impression of some pleasure comes into your mind, guard yourself against being carried away by it, just as you should do with impressions in general.  Let the thing wait a bit, and give yourself a pause." (Encheiridion 34)
Posted by rockyrook at 6:00 PM