Epictetus Discourses 3.9 - To an orator who was going to Rome in connection with a lawsuit

To a certain rhetorician who was going to Rome for a lawsuit
There is a part of me who wonders what it would be like, especially in today's post-modern society,  to be an Epictetus or Diogenes or a student of one of them.  It seems they would sit in their school all day long and lecture and have conversations with visitors and teach them where their thinking ought to be fixed.  Poverty was nothing to them; their needs were met and they had either a small family or no family at all to care for.  I wonder if I would be up to the challenge of living a poor philosopher's life.

We get a glimpse into the comparison between the life of a busy, ambitious orator and a philosopher in book 3, chapter 9.

Epictetus observes that both the orator and his opposition think they have sound judgement, yet they both disagree with each other.  How is that?  Therefore, the criteria for good or bad judgement must be something else (see. v. 5, p. 160-161).

Epictetus informs the orator that the central rule of a philosopher is "ensuring that whatever comes about, our ruling centre is and forever continues to be in accord with nature" (v. 11, p. 161).

Epictetus chides the orator for wanting to visit Epictetus only for show and that he (the orator) only came to see Epictetus and not to really come to know and learn of him.  The only real way to know a person is to "become acquainted with his judgements, and show him one's own judgements in one's turn."  Epictetus tells him, "Learn to know my judgements, show me your own, and then you can say that you've met me.  Let's cross-examine one another; and if I'm harbouring any bad judgement, root it out, or if you're harbouring any, bring it to light.  That is what meeting a philosopher is all about" (v. 13, p. 162).

Some might complain that by focusing time and effort on these matters (discussing good vs. bad judgement, talking to a philospher), they will lose their land or their "silver goblets" and cattle.  To which Epictetus would say, "But I have no need of such things, and even if you come to acquire many possessions, you'll need more again, and whether you wish it or not, you're more poverty-stricken than I am" (v. 16, p. 162).

Someone who is focused on acquiring wealth and protecting it, sacrifices "stability, a mind in accord with nature, and freedom from agitation" (v. 17, p. 162).  They are focused on things that perish and will turn to dust.  They are distracted by all these things, so much so, that they "go to the theatre to kill time" (v. 20, p. 162).  This mental disease is exactly what afflicts post-modern society today.  People want kill time on their phones, flipping through social media, playing games and streaming content such as TV shows and movies. 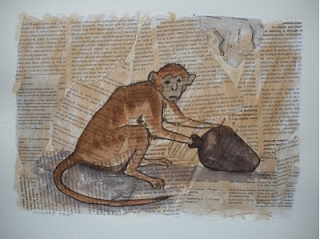 Focusing on acquisition and the upkeep of material possessions leads to "insatiable" desire, while the philosopher has his or her desires "already fulfilled" (v. 21, p. 162).  Malcontents are like monkeys or children who "push their hand into a narrow-necked jar and try to extract nuts and figs; if they fill their hand, they can't get it out again, and then burst into tears.  Drop a few of them and you'll get it out (v. 22, p. 162-163).