The Father of Us All by Victor Davis Hanson 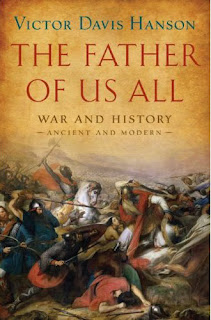 I was very excited to read The Father of Us All.  As expected, it was fairly easy reading and extremely educational.  Hanson's ease of words makes it smooth for the reader.  His vast knowledge inspires the reader to learn more of military history.  I was very appreciative of the comprehensive list of books on war that he provided in the first chapter.  There is a lifetime of reading and learning in that list alone.

There were two main points that I got out of this book.  The first was the explanation of why we need to study war.  The old adage still holds true when it comes to war.  Those who do not know their history on war are doomed to repeat the same mistakes.  Hanson also laments the fact that Military History as a study has declined considerably.  He comments how few people know names and places of outcomes of battles.  One particular comment brought a stark realization to me - that I do not know much of past battles and sacrifices.  He said, "Military History has a moral purpose: educating us about past sacrifices that have secured our present freedom and security.  If we know nothing of Shiloh, Belleau Wood, Tarawa, and Chosin, the crosses in our military cemeteries are reduced to just pleasant white markers on lush green lawns."

The second point was about the pressures put on modern America to fight clean, flawless wars and how this has made it very difficult for America to "win" wars.  In her luxury, America wants quick victories with no losses.  Old School Americans scoff at this idea as they know that all wars are downright tragic and never perfect.  As Hanson repeats oft in the book, each warring side makes mistakes and therefore victory goes to the nation that learns from its mistakes more quickly than the other.

The rest of the book is commentary on these two points as well as the state of modern warfare.  One comment about modern warfare ... decisive warfare where the losing nation is outrightly defeated and humiliated is shunned upon in today's society.  Instead, the pervading notion is that we must simply put down the other nation without the humiliation.  It is a simple notion, but as I write this, I remember thinking as a kid that Germany, Italy and Japan were much better off losing outright to the Americans than if they had settled for peace.

Hanson also provides a lot of commentary on the current state of war in our world.  His insights to past and present wars rings a bell of warning to all those who would listen.  Sadly, however, many do not listen and instead choose to blindly believe that war can be outlawed or unlearned by people.  This dangerous line of thinking has not only been the demise of past nations but will prove to be the demise of current nations (especially those in the West) if they do not turn from this false reasoning.
Posted by rockyrook at 4:36 PM