Letters from a Stoic 13 - On Groundless Fears

Not everyone does it, but there are many who catastrophize things.  We may think the worst is going to happen, that we are going to die young, or our child will be mangled to death in a car wreck, or we'll contract the corona virus while shopping or that our child will be kidnapped while walking to school.

It's exhausting; thinking of all the possible things that could end up happening to us or our loved ones.  But the truth is, we are all dead in the end anyway.  Which is why, I think, the Stoics advocated practicing memento mori.  If you can get comfortable with death, then everything else should be a bit easier to deal with, emotionally speaking, and you can get on with life.

And once you get on with life and start taking your licks, you can begin to be truly tested and learn from adversity.

It is only in this way that the true spirit can be tested, – the spirit that will never consent to come under the jurisdiction of things external to ourselves.  This is the touchstone of such a spirit; no prizefighter can go with high spirits into the strife if he has never been beaten black and blue; the only contestant who can confidently enter the lists is the man who has seen his own blood, who has felt his teeth rattle beneath his opponent's fist, who has been tripped and felt the full force of his adversary's charge, who has been downed in body but not in spirit, one who, as often as he falls, rises again with greater defiance than ever.


Besides, even if you decide to engage in doubting and fear-mongering about your future and thinking the worst might happen, vastly more often than not, the worst you feared does not come to pass.

On some of the catastrophes I think if, I will pivot into a premeditatio malorum and assume that they legitimately will happen.  I then let my mind process the emotions and then I begin to think of the wise reaction.  From there, I outline the next few actions I would take.

Often, especially in today's uber-safetyism society, we allow ourselves to be carried away with fear and panic, when it is not warranted.  In the 1990s, when I was in high school, the fear of children being kidnapped was exceptionally high.  I remember when every kid I knew, would often wander my city, on his or her bike, with no adult supervision.  We would be gone for hours and hours, before returning home in time for dinner.  But then that all changed with the introduction of John Walsh's crusade, after his son was kidnapped and murdered.  Every kid who grew up in the 1980s and 90s remembers the pictures of kids on milk cartons.

Eventually, parents everywhere, were uber-cautious about letting their child walk or ride their bike alone.  Kids were told to walk in packs and never to take candy from strangers.  To be sure, all of these are wise practices.  But have parents gone too far?  Have they, for the sake of safety, not allowed their kids to spend hours and hours outside, playing and riding bikes?

Jonathan Haidt and Greg Lukianoff, think we have let safetyism (another form of catastrophizing) run amok.  Consider this passage on kidnapping statistics:

The abduction and murder of a child by a stranger is among the most horrific crimes one can imagine. It is also, thankfully, among the rarest. According to the FBI, almost 90% of children who go missing have either miscommunicated their plans, misunderstood directions, or run away from home or foster care, and 99.8% of the time, missing children come home. The vast majority of those who are abducted are taken by a biological parent who does not have custody; the number abducted by a stranger is a tiny fraction of 1% of children reported missing—roughly one hundred children per year in a nation with more than 70 million minors. And since the 1990s, the rates of all crimes against children have gone down, while the chances of a kidnapped child surviving the ordeal have gone up. (Haidt, Lukianoff, The Coddling of the American Mind, in the section entitled "A Parent's Worst Fear")


After I read the above paragraph, I was in a state of shock about how astronomically over-protective and worried I've been with my kids!  There are far many more things to be worried about than having my child be kidnapped.

At the time of this writing (August 2020), America and the world are in the grip of fear about the corona virus.  So much is not known about the virus and people are so fearful of death, that we have effectively shutdown society.  Many wonder if we have over-reacted.  Just yesterday, I pulled the statistics on COVID-19 deaths and found that the vast majority of deaths related to COVID-19, occur in people who have retired.  Well over 95% of the deaths are age 55 and older.  The younger a person is, the death-rate drops off significantly.  Yet, we act as though the virus is killing both the old and young on a grand scale.  We have not heeded the advice of Seneca.

Yes, my dear Lucilius; we agree too quickly with what people say. We do not put to the test those things which cause our fear; we do not examine into them; we blench and retreat just like soldiers who are forced to abandon their camp because of a dust-cloud raised by stampeding cattle, or are thrown into a panic by the spreading of some unauthenticated rumour. ... that which arises from uncertainty is delivered over to guesswork and the irresponsible license of a frightened mind. That is why no fear is so ruinous and so uncontrollable as panic fear. For other fears are groundless, but this fear is witless. 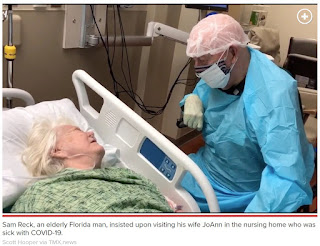 Seneca goes so far as to argue, "life is not worth living, if we indulge our fears to the greatest possible extent."  Many senior citizens I've talked to, have said as much.  Sitting in a locked-down home and city and state and world is no way to live.  While temporary lockdowns may be prudent, the seemingly endless threats of lockdowns and shutting of stores and economies makes monks of us all.  While sad, I was yet impressed with a recent headline of a loving couple who refused to be separated in the twilight of their years.  She contracted corona virus and was quarantined, yet he was told to stay away.  He refused, and spent time with his bride.  He too contracted COVID-19 and they both died.  From a news article, their daughter is quoted, “he knew the risks,” she said. “There wasn’t anything any of us could have done to have talked him out of that. He would have gotten himself there one way or the other to see her. I do believe that.”

Accordingly, weigh carefully your hopes as well as your fears, and whenever all the elements are in doubt, decide in your own favour; believe what you prefer. And if fear wins a majority of the votes, incline in the other direction anyhow, and cease to harass your soul, reflecting continually that most mortals, even when no troubles are actually at hand or are certainly to be expected in the future, become excited and disquieted ... We let ourselves drift with every breeze; we are frightened at uncertainties, just as if they were certain. We observe no moderation. The slightest thing turns the scales and throws us forthwith into a panic.