Blue at the Mizzen by Patrick O'Brian 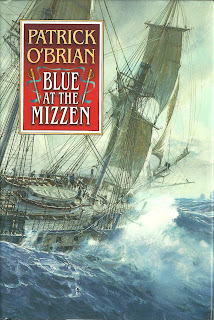 I've been reading passionately the last few days.  This is the last fully written book by Patrick O'Brian.

The title, obviously references the blue flag an active admiral hoists in his ship ... a full admiral as opposed to an admiral in name only - a yellow admiral.

This book had elements from many of the other books.  It had doldrums; rounding the horn in horrific weather; reports of animals, birds, flora and fauna; fighting; sea-battles; cutting-out; political intrigue and spying ... all for glory and prize.

In the backdrop is the question whether Jack will receive his flag or not.

Stephen explains to a colleague, "he is a post-captain near the top of the list.  But he is at that stage when some members of the group with approximately the same seniority are selected for flag-rank as rear-admiral of the blue.  By no means all can be chosen: those who are not chosen, those who are passed over, are colloquially or by way of derision known as yellow admirals, admirals of a non-existent squadron.  And that is the end of the poor man's hopes: there is no return to eligibility.  Merit has something to do with this vital step, yet influence has more - political and family influence have more, sometimes much more; and Jack Aubrey has not always been politically wise.  He is very much afraid of picking up the Gazette in the next few months and of seeing men junior to himself being given their flag, a blue flag, to be hoisted at the mizzen, if my memory serves: a piece of bunting extraordinarily important to a man who has pursued it with such ardour for so many years.  And now that we are no longer at war, now that there is virtually no chance of his distinguishing himself, it is understandable that his light should at least grow dim: there is the real possibility that it should go out entirely.  And there is nothing that can restore it, nothing but that piece of cloth.  Nothing."

Stephen reads the message to Jack, "Immediately upon receipt of the present order you will proceed to the River Plate, there joining the South African squadron: you will go aboard HMS Implacable, hoisting your flag, blue at the mizzen and take command of the blue squadron."

"Jack sat down, bowing his face in his hands: he was almost unmanned, but after a moment he did say, "Read that again, will you Stephen?"

And now, all that I am left with is 21.  I'm not sure it will provide much pleasure, but I see it more in the light of curiosity - just to see what thoughts might have created the 21st book.

After I peruse it's pages this week, I'll offer some thoughts on it and the entire series in general.

I can't help but admit that I am sad, having finished this book.  I've been so thrilled to come to the very end and to have that sense of accomplishment, but now that I'm here ... it's just plain said ... like an life-long friend is about to depart forever.
Posted by rockyrook at 5:09 PM