The Wine-Dark Sea by Patrick O'Brian 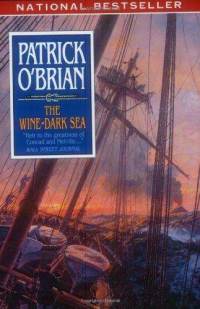 Here is the link to the Wiki summary.  It does a fine job summarizing the book so I don't have to!

I'm glad I found this picture of the front cover, because it is the same version of the one that I read ... meaning it has "National Bestseller" on the front.  It lived up to the name.

What the previous two books failed to do (provide sufficient action and intrigue and actually interesting descriptions of flora and fauna), this one actually delivered.  It was a much, much better read than the previous two.

This book also seems to end the long mission of trying to disrupt the Spanish governments in South America.  I forget how many books ago it was, but a few books ago, Stephen's mission was to start revolutions in South America and he finally got around to doing just than in this book.  Although, he didn't succeed.

So, I for once enjoyed the doctor's descriptions of his botonous adventures.  Maybe it was because I was actually interested in the descriptions this time ... or maybe because it wasn't so foreign to me.  But whatever the reason, I enjoyed it.

The action in the middle and end of the book (battling the pirates and then the Americans) was good action.  Are we going to see Jack with an eye patch now?  I guess I'll find out in the next book.  Stephen didn't come out unscathed either ... he survived a blistering cold night in the Andes, but paid with two of the less useful toes.

As a side note, while searching for a picture of the book cover, I came across another image.  When I saw it, I thought it was of the battle between the Surprise and the Americans ... but I didn't find any titles.  I imagine the battle in that cold South Sea looked something like this: 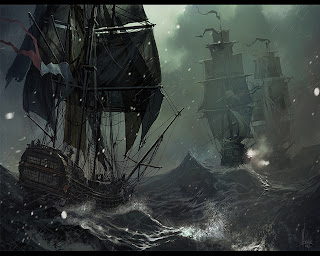 And lastly, a note about the title.  I haven't read about all of it quite yet, but the wine-dark sea seems to be a phrase connected with Homer.  Let be briefly share a link I found from the NYTimes.  "Homer's Sea: Wine Dark?"
Posted by rockyrook at 5:07 PM