The Reverse of the Medal by Patrick O'Brian 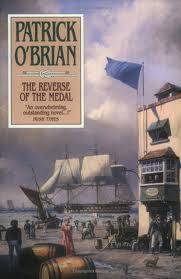 Excellent, excellent book!  Like a clock with so many turning wheels and cogs, this books turns on so many points - on a macro, as well as a micro scale - therefore the title.  I figured I 'smoked' the meaning of the title, but I finally confirmed it with a little googling.  This bunch of bookworms sum it up well.  I'll paste the relevant posts below.

Which brings me to a related point: the book's title is, I think, like The Surgeon's Mate, a play on words: this turning of fortune is, I think, the pun meaning of the title's "Reverse", but my question is: what is the primary meaning? The Reverse of the Medal: the only medal I recall mentioned in the book is Jack's Nile medal: is there anything of significance on the back of it? Or is perhaps the title an idiomatic expression like "the other side of the coin"?


I think that "the other side of the coin" is the likely meaning. There is nothing particularly significant about the reverse side of the Nile medal. I'm not sure which side is considered the front, but a goddess (Britannia?) is shown on one side, with a small picture of Nelson, and a fine scene of the battle is on what is probably considered the reverse (though the sun is incorrectly shown setting in the east).


Big OED gives "things turning for the worse" as a 'reverse of the medal' meaning as early as 1641, in the diaries of John Evelyn. 'Le revers de la medaille' is common in contemporary French for 'the other side of the picture'. When I (with the honour of speaking British English, true and pure.........) first saw RoM, I immediately read it as 'a turn for the worse' - though, in truth, I cannot recall ever actually having heard the expression used.

The three posts above, to me at least, confirm that Reverse of the Medal means a turn in luck or a turn of fortune.

The coin flips on so many levels in this book.  The subject of luck had been hit upon before in other books.  But at the beginning of chapter three in Reverse of the Medal, POB lays it on thick, discussing the topic in depth.  Jack's luck had been waning during the last few books.  Now, in this book, his luck does a 180.  And it turned so quickly - one minute he thinks all his money problems will be solved.  Then in a matter of days (weeks?) he is being pilloried.

Stephen - virtually struck dumb about the double-agent Wray - has a turn of luck when Duhamel returns Diana's stone and also reveals who the authors of Jack's bad luck are.

Both HMS Surprise and Jack are flipped from being in the Navy to being privateers.

Another superb book by POB.  I am very excited to get on with the next one.  Having finished this one in 20 calendar days (13 actual days), I think I may begin flying through the remainder of the books even quicker!
Posted by rockyrook at 5:05 PM