The Surgeon's Mate by Patrick O'Brian 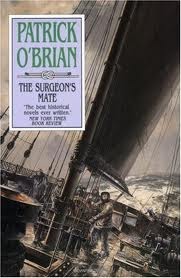 As always, a clear summary is provided at Wikipedia - click here.

This book sees the return to Europe of Jack and Stephen.  The chase across the Atlantic was pretty interesting.  There was even some juicy parts with Jack trying to deal with Miss Smith telling him that she was expecting his child.

I'm always learning a bit about the Napoleonic Wars.  That era seems to be very fascinating - especially in trying to understand the dynamics of the European powers and the United States.  The whole background to these novels deals with trying to overthrow Napoleon.  It has piqued my interested enough that I may try to find a good book about those wars and perhaps the man too.

This book was no different in shedding some more light on that era.  But of course I'm entirely reliant on Wikipedia in learning what was fact and what was fiction.

So because Wikipedia provides such good summaries, I asked myself the question "why no just read the summaries and be done with it?"  It is because O'Brian paints such a rich picture of that era.  I really do get caught up in the details of sea-life.  Also, I've been really enjoying reading how O'Brian manages to keep Stephen alive.  He puts him in some really tight spots.  The spying and the intrigue are fascinating.  So in summary, the books are far, far richer and enjoyable than the summaries ... which is why we read anyway, right?  To be transported to another place and time.

And one more tid-bit ... this from Wikipedia: "The book title is a triple entendre in its use of the term "mate", referring to a ship's surgeon's assistant, a chess reference to Maturin's successful espionage efforts (i.e., checkmate), and Maturin getting married at the end of the story."

I'm not sure I entirely agree with the chess reference.  If it refers to the defeat of Napoleon, it doesn't work.  However, if it refers to the successful escape (and re-escape) from the American Johnson, then I can see it.

On to The Ionian Mission.
Posted by rockyrook at 5:01 PM