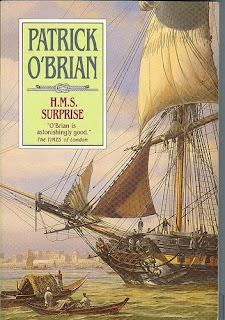 I'm taking a brief break from Aubrey-Maturin to finish reading a couple of Harry Potter books.  I had been reading The Half-Blood Prince to the kids and then I ended up finishing reading it on my own.  The movie and book differ quite a bit - both for good and bad.  I then picked up The Deathly Hallows since the movie for that book is coming out November 19 - at least part 1 of that movie.  The 2nd part will come out next year in July (I think).  I've only read Deathly Hallows once when it first came out 3 years ago.  I've fogotten so much, it's like I'm reading it for the first time.  I'm half-way finished with it and am enjoying it quite a bit.  I should be done either this or next week.  Then I'll begin The Mauritius Command.
Posted by rockyrook at 4:40 PM