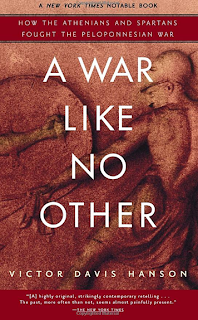 I enjoyed this book so much, every time we got to Half-Priced Books, instead of heading right to the chess section, I now head to the history section and look for Victor Davis Hanson books. On our last trip, I landed two VDH books and one general ancient Greek history book (along with a book about the golden age of piracy). So for the next several months, I'll be reading and learning about ancient Greece and reading VDH.
Posted by rockyrook at 4:16 PM