The True Believer by Eric Hoffer

I'm not sure where I heard about The True Believer first. I think I heard it referenced on a talk show once or twice and decided that it'd be a good read. I got it for Christmas four or five years ago and ever since, it's been collecting dust. 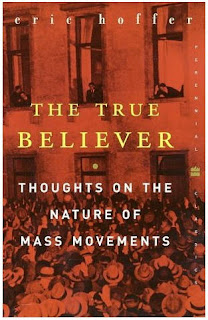 I started it once before, but lost interest pretty quickly. This time I was able to get into it. What a fascinating book! I marked it up page after page after page. We are seeing examples of mass movements in all stages in our country and around the world today.

I'm not going to summarize it as a whole book, but I will say that Eric Hoffer makes the same point over and over again in the book ... the unfulfilled individual is a fanatic who joins mass movements.
You can find a good summary of the book at Wikipedia.
For my own personal use, I'd like to quote several parts I underlined and found interesting. Many of the sections I marked were modern-day examples of a true believer or mass movement.
Some of the Quotes I Marked (my comments in italics)
"Fear of the future causes us to lean against and cling to the present, while faith in the future renders us receptive to change" (9)

"The word 'frustrated' is not used in this book as a clinical term. It denotes here people who, for one reason or another, feel that their lives are spoiled or wasted." (Preface, note 1)

"A man is likely to mind his own business when it is worth minding. When it is not, he takes his mind off his own meaningless affairs by minding other people's business." (14)

"Mass movements are usually accused of doping their followers with hope of the future while cheating them of the enjoyment of the present." (15)

"Discontent is likely to be highest when misery is bearable; when conditions have so improved that an ideal state seems almost within reach." (28)

"It is not actual suffering but the taste of better things which excites people to revolt. A popular upheaval in Soviet Russia is hardly likely before the people get a real taste of the good life." (29)

The previous two quotes remind me of the fall of the Iron Curtain. Westernization brought an end to Russian communism.

"Unless a man has the talents to make something of himself, freedom is an irksome burden." (31)

"We join a mass movement to escape individual responsibility, or, in the words of the ardent young Nazi, 'to be free from freedom.'" (31)

"Almost all our contemporary movement showed in their early stages a hostile attitude for the family, and did all they could to discredit and disrupt it. They did it by undermining the authority of the parents; by facilitating divorce; by taking over the responsibility for feeding, educating and entertaining the children; and by encouraging illegitimacy." (36) The gay movement, Liberal/Socialists, Abortion movements, "family planning"

"The permanent misfits can find salvation only in a complete separation from the self; and they usually find it by losing themselves in the compact collectivity of a mass movement. By renouncing individual will, judgement and ambition, and dedicating all their powers to the service of an eternal cause, they are at last lifted off the endless treadmill which can never lead them to fulfillment." (47) The same could almost be said of Christian discipleship.

"The technique of a mass movement aims to infect people with a malady and then offer the movement as a cure." (54)

"The purpose of the Iron Curtain is perhaps more to prevent the Russian people from reaching out - even in thought - toward an outside world, than to prevent the infiltration of spies and saboteurs." (66) The Information Age makes Iron Curtains difficult to establish.

"Not only does a mass movement depict the present as mean and miserable - it deliberately makes it so. It fashions a pattern of individual existence that is dour, hard, repressive and dull. It decries pleasures and comforts and extols the rigorous life. It views ordinary enjoyment as trivial or even discreditable, and represents the pursuit of personal happiness as immoral". (69)

"The facts on which the true believer bases his conclusions must not be derived from his experience or observation but from holy writ. 'So tenaciously should we cling to the world revealed by the Gospel, that were I to see all the Angels of Heaven coming down to me to tell me something different, not only would I not be tempted to doubt a single syllable, but I would shut my eyes and stop my ears, for they would not deserve to be either seen or heard.'" (79) I said something similar about the Book of Mormon. Equally, Evangelicals feel the same way about the Bible ... they will not hear anything of further revelation.

"When a movement begins to rationalize its doctrine and make it intelligible, it is a sign that its dynamic span is over; that it is primarily interested in stability." (81)

[Mass movements depict] "man on his own [as ] a helpless, miserable and sinful creature. His only salvation is in rejecting his self and in finding a new life in the bosom of a holy corporate body - be it a church, a nation or a party. In its turn, this vilification of the self keeps passion at a white heat." (85) Discipleship

"Every difficulty and failure within the movement is the work of the devil, and every success is a triumph over his evil plotting." (93) Liberals are quick to point to Bush for all the failures of the past decade ... Iraq, Hurricane Katrina, Global Warming, the Economy ... all of it is Bush's fault.

"Self-righteousness is a loud din raised to drown the voice of guilt within us." (95)

"The Americans are poor haters in international affairs because of their innate feeling of superiority over all foreigners. An American's hatred for a fellow American (for Hoover or Roosevelt) is far more virulent than any antipathy he can work up against foreigners. ... Should Americans begin to hate foreigners wholeheartedly, it will be an indication that they have lost confidence in their own way of life." (96) How much do Liberals hate Bush and Conservatives hate Obama.

"The torture chamber is a corporate institution." (101) War on terror.

"It is also plausible that those movements with the greatest inner contradiction between profession and practice - that is to say with a strong feeling of guilt - are likely to be the most fervent in imposing their faith on others." (111) The Global Warming movement

Page 118 has two paragraphs that pretty much summarize what a True Believer is:

"People whose lives are barren and insecure seem to show a greater willingness to obey than people who are self-sufficient and self-confident. To the frustrated, freedom from responsibility is more attractive than freedom from restraint. They are eager to barter their independence for relief from burdens of willing, deciding and being responsible for inevitable failure. They willingly abdicate the directing of their lives to those who want to plan, command and shoulder all responsibility. Moreover, submission by all to a supreme leader is an approach to their ideal of equality.

"In time of crisis, during floods, earthquakes, epidemics, depressions and wars, separate individual effort is of no avail, and people of every condition are ready to obey and follow a leader. To obey is then the only firm point in a chaotic day-by-day existence."

"All the true believers of our time - whether Communist, Nazi, Fascist, Japanese or Catholic - declaimed volubly (and the Communists still do) on the decadence of the Western democracies." (163) The environmentalists

After reading a few other book reviews on-line, I find it interesting that conservatives point the finger at liberals saying they are true believers while liberals do the same to conservatives. But I guess this is what Hoffer was trying to say toward the beginning of the book ... that just because there are mass movements doesn't make them evil or good per se. There are mass movements and true believers all around us.

"The Legacy of Eric Hoffer" by Thomas Sowell